Global Indianstory What’s with Indian-Americans and the US Spelling Bee contest?

What’s with Indian-Americans and the US Spelling Bee contest?

(June 14, 2022) In 1985, Balu Natarajan became the first Indian-American kid to win the Scripps National Spelling Bee. And since then, the Indian-American community has pretty much dominated the competition. Even though they make up only about one percent of the United States’ population, 27 Indian Americans have won the Spelling Bee championship so far since 1999, including the most recent winner Harini Logan.

According to Pawan Dhingra, professor of sociology and American Studies at Amherst College, the success of Indian-Americans at the Scripps National Spelling Bee stems from the firm commitment of their families to spend the kind of time and money needed to prepare their kids. “These children are not just brilliant in spellings, they also excel in geography, mathematics and other academic competitions”, Dhingra wrote in The Conversation.

Global Indian puts the spotlight on five Scripps National Spelling Bee champions, who have made us all proud.

Indian-American teen Harini Logan emerged as the champion of the 2022 Scripps National Spelling Bee. A student of Grade VIII from San Antonio, Texas won the 94th annual Scripps National Spelling Bee by spelling the most words correctly in a spell-off, the Bee’s first since its inception in 1925. Harini managed to spell through more words than more than 230 other competitors at the national level, including 12 other finalists. “I’ve been working towards the Bee for nearly seven years, since I was in first and second grade,” Harini said in a media interaction shortly after winning the title. “Spelling is something that sticks with you for life. Once you get into this journey, there’s a dedication you develop along with a work ethic. Networking for the bee is another skill you learn along the way.” 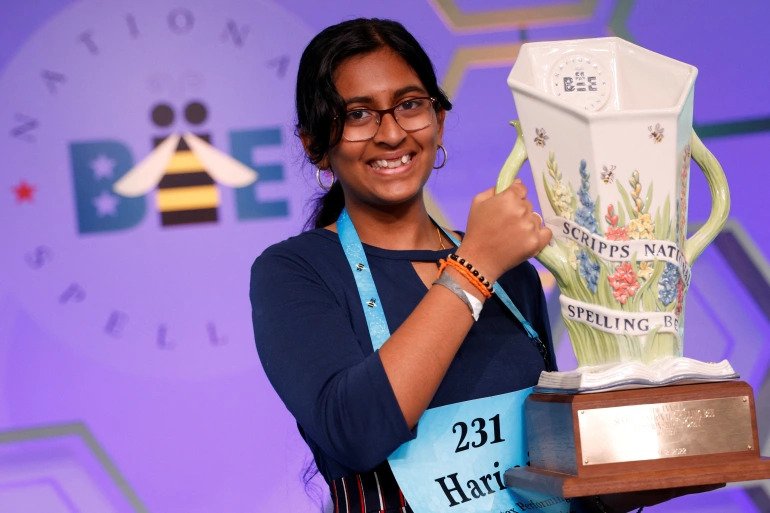 The competition was rigorous, with 20 rounds culminating in a lightning round that pitted the top two finalists in a showdown in which they attempted to correctly spell as many words as possible within 90 seconds. The youngster beat Vikram Raju, another Indian origin student, who studies in Grade VII in Denver. While Logan spelled 21 words correctly, her opponent could only manage 15. Harini’s parents are from Chennai, and she has a younger brother.

A soft-spoken eighth-grader from McKinney, Dallas, Karthik Nemmani was declared the champion in the 2018 edition of Scripps National Spelling Bee. Interestingly, this 17-year-old came to the Bee through a new program called RSVBee, which allows spellers who haven’t won a regional bee or had a chance to compete with the best. Karthik was in a nail-biting competition against another Indian-American, Naysa Modi who misspelled “Bewusstseinslage” and paved way for Karthik’s victory. 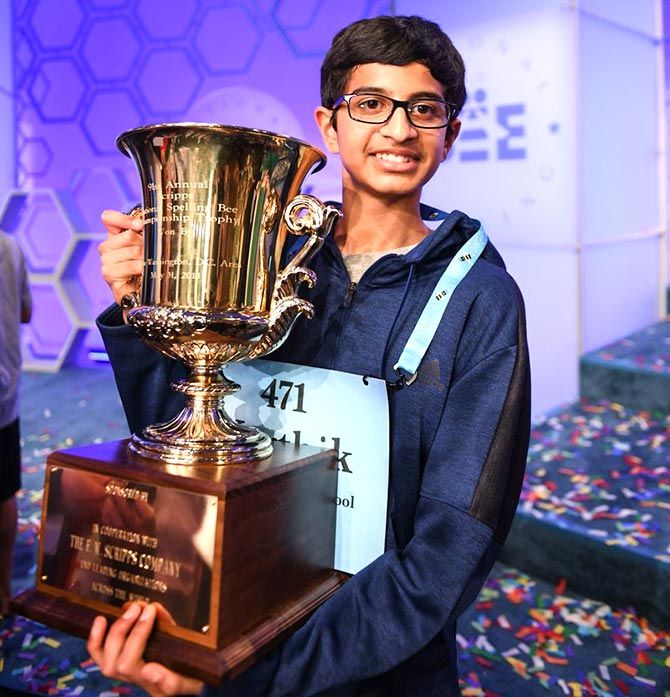 The champion took home 40,000 USD and a trophy from Scripps Bee, which is sponsored by the EW Scripps media group, in addition to a $2,500 cash prize from Merriam-Webster, the dictionary publisher and other prizes. Karthik had to spell two words correctly to seal the title, which he did with ease, and the teenager stepped back and smiled as he was showered with confetti. His winning word was “koinonia,” which means Christian fellowship or communion. “It was just an adrenaline rush,” he told media after winning the competition, adding, “I had confidence, but I didn’t think it would really happen.”

At 11, Nihar Janga emerged as the youngest speller to win the Scripps National Spelling Bee title in the year 2016. The young kid from Austin, Texas nearly won outright twice in the championship rounds following errors by another contestant – Jairam Jagadeesh Hathwar, who was the co-winner of the title. Interestingly, an audience favorite, Nihar was often seen verifying definitions of obscure words with the judges — “is that an Irish prime minister?” — rather than requesting them. 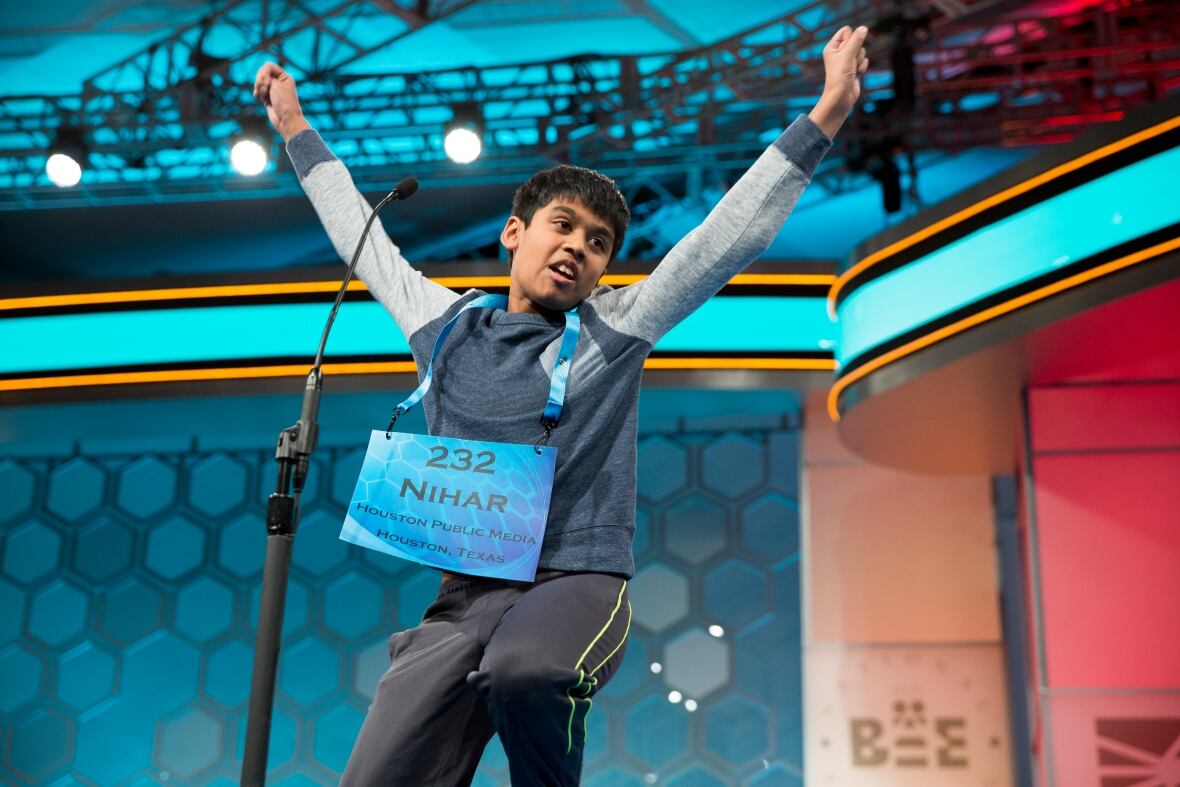 “I am just speechless. I can’t say anything. I am only a fifth grader,” Nihar said with the trophy in his hand, as he attributed his success to his mother. “My mom. It’s just my mom,” the Spelling Bee champion said.

Ananya Vinay became the 13th consecutive Indian-American to win the contest and 18th of the past 22 winners with Indian heritage, in 2017. The 12-year-old from Fresno, California, showed little emotion and didn’t take much time as she ploughed through word after word. Sometimes she would blurt out questions, with little intonation “Part of speech?” “Language of origin?” 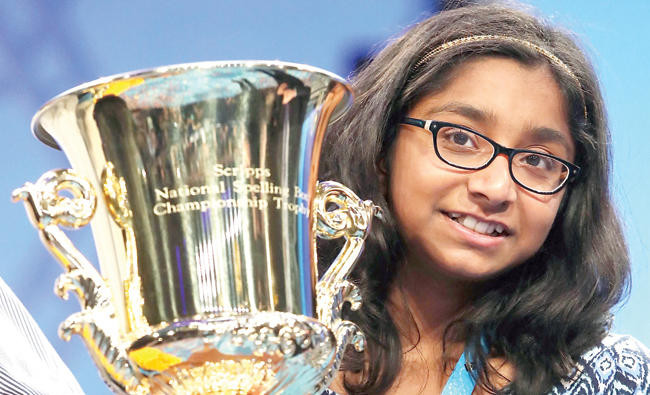 Unflappable to the end, Ananya seized the opportunity when her steely opponent, Rohan Rajeev, flubbed a simple-looking but obscure Scandinavian-derived word, “marram,” which means a beach grass. She calmly nailed two words in a row, ending on “marocain,” which means a type of dress fabric of ribbed crepe, to win the 90th Scripps National Spelling Bee. “I knew them all,” Ananya said, after winning the trophy, adding, “It’s like a dream come true. I’m so happy right now.”

Most people couldn’t spell “cymotrichous” with a dictionary. Fourteen-year-old Sukanya Roy from Pennsylvania isn’t most people – she spelled her way through it with ease, going on to win the 2011 Scripps National Spelling Bee. The teenager who participated in the high-profile annual U.S. spelling competition for the third time, won after 20 rounds in the final competition that went on until late evening. An eighth grader at Abington Heights Middle School, Sukanya traced the letters of each word on her hands, round by round, increasing her confidence, she said. 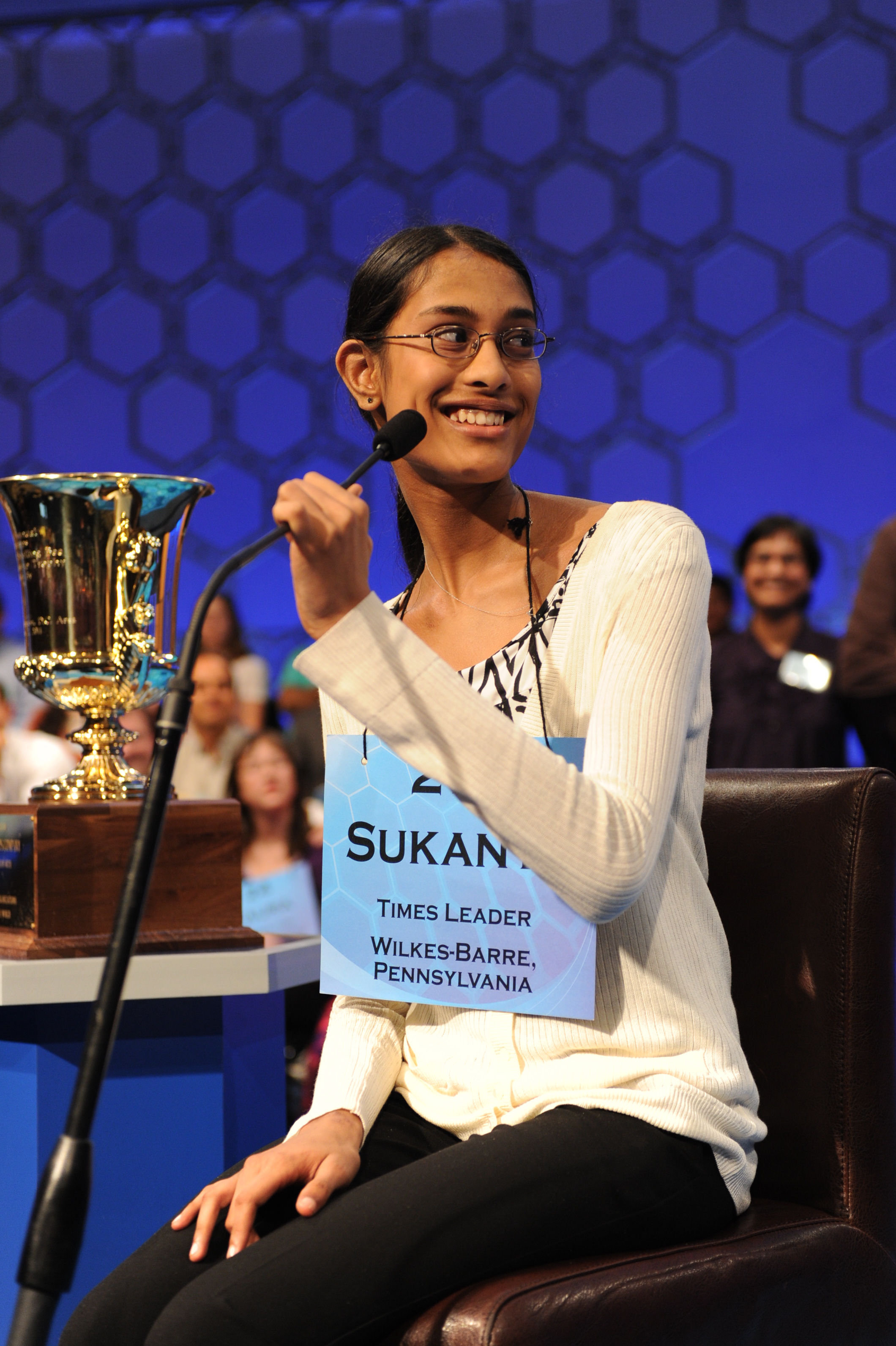 After winning, she was shaking with excitement. “My heart started pounding, I guess. I couldn’t believe it,” Sukanya told an ESPN broadcaster immediately after receiving her trophy. Speaking about spelling “cymotrichous” – which means having wavy hair – correctly, she said, “I knew it immediately, but I focused on just spelling it right.” Besides the trophy, she took home a $30,000 cash prize, a $2,500 U.S. savings bond, a complete reference library, a $5,000 scholarship, $2,600 in reference works and other prizes.