Global Indianstory From being called low-functioning to creating history, Hari Srinivasan has come a long way

From being called low-functioning to creating history, Hari Srinivasan has come a long way

(June 20, 2022) When he was first diagnosed with regressive autism, scholar Hari Srinivasan was only three years old. From being a very active and social child, Hari suddenly became a crying, fussy baby, who did not want to be around other kids. To ensure that her child gets all the support that is required, Hari’s mother left a blooming career in IT and started to navigate the messy maze of services and therapies. He had difficulty in speaking and even recognising his own parents.

While initially the doctors and behavioral experts called him low-functioning, Hari and his parents didn’t lose hope. After about two decades, Hari created history, as University of California, Berkeley’s first non-speaking graduate with autism. And that is not all. With a 4.0 GPA, a major in psychology and minor in disability studies, Hari was also awarded the prestigious P.D. Soros Fellowship. The young graduate is now headed to Vanderbilt University for his PhD in neuroscience. 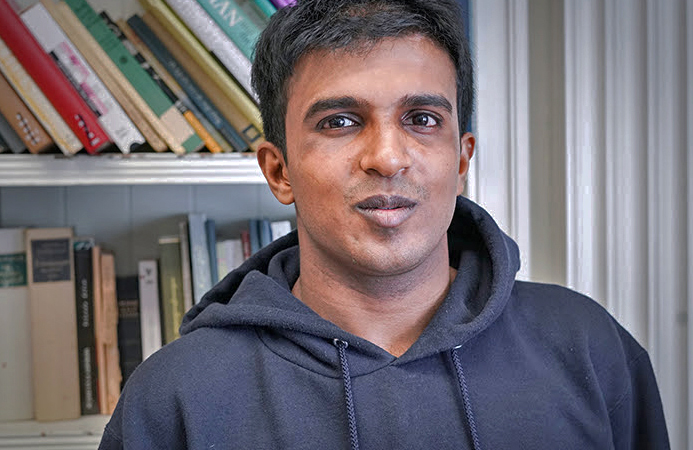 “Let me first describe my disabilities,” says the youngster, during an interview with Global Indian, adding, “I have limited speaking due to oral motor apraxia, autism and attention-deficit/hyperactivity disorder (ADHD). I also have movement issues, fine motor challenges, body schema challenges, sensory dysregulation and anxiety. Who would have thought I would go anywhere near a college when I was in special education school stacking blocks.” smiles the scholar.

He adds, “There were several issues that I and my family faced due to my medical condition during the initial years. However, with the support of my family I was able to break several stereotypes. Later, my faculty and peers at UC Berkeley helped me a lot on my journey.”

Hari’s parents – a native of Chennai – had shifted to San Francisco, California in 1993. Five years later, in 1998, the couple welcomed a happy boy, who was very intelligent and loved to read. “My grandma recollects how when I was about 16 months old, I would bring my favorite Dr Seuss book for her to read, while i sat on her lap. However, when she was leaving for India about six months later, I had lost all interest in books,” shares Hari.

Since not much information was available about autism at the time, Hari’s parents thought that like other kids he too will move on to different things. “But it was my other grandmother who noticed that I had even stopped responding to my name. My parents took me specialists to check if my hearing was impaired. When, we were in India for a vacation, my parents took me to a child psychiatric in Chennai. There I lined up all the 50 toys in the room. Even though lining up things is one of the obsessive autism behaviours, the doctor didn’t diagnose me as autistic,” shares the scholar. 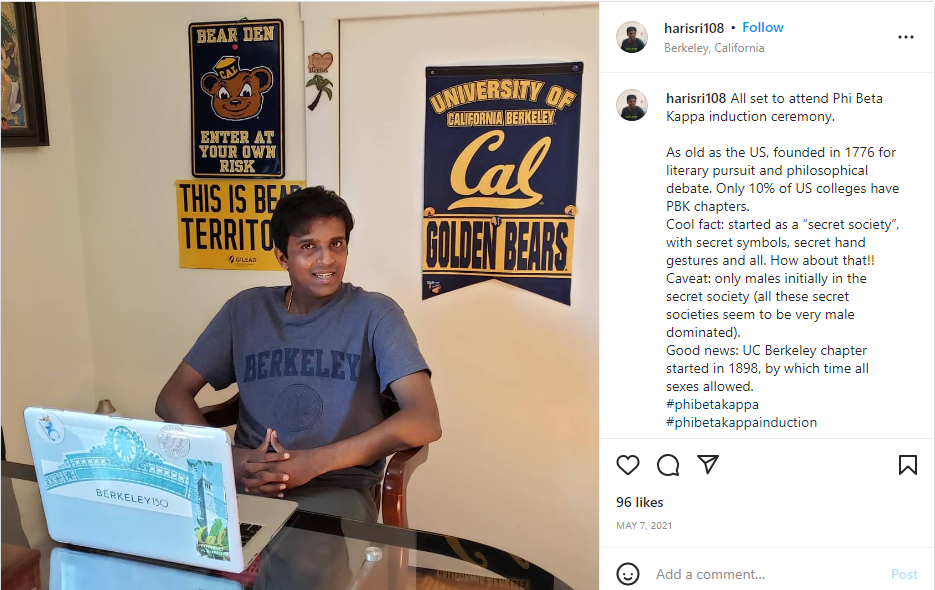 It was only when he was three years old, that a child neurologist diagnosed him in mere five minutes. “There was no support for kids like me back in the day. So, while the doctor diagnosed me, he asked my parents to visit him again after six months. My parents later found that there was a parent support group and they connected with them,” Hari says, adding that after meeting other people his parents put him special education classrooms.

Fighting for a better future

While he was enrolled into a classroom, Hari wasn’t happy with his education there. Hari was regarded as a “difficult” case and was moved many classrooms which was hardly conducive for a young child. “I felt like a kid outside a candy store looking longingly at the candy inside. My nondisabled peers were getting to learn all this cool science but my fifth-grade class was still working on the same lessons that I was doing from kindergarten , like spelling c-a-t. I was sad and frustrated and did not see how my situation would change. Perhaps over time I would have reached a state of apathy that I see in other disabled adults around me,” shares the scholar, who struggled a lot during those days. 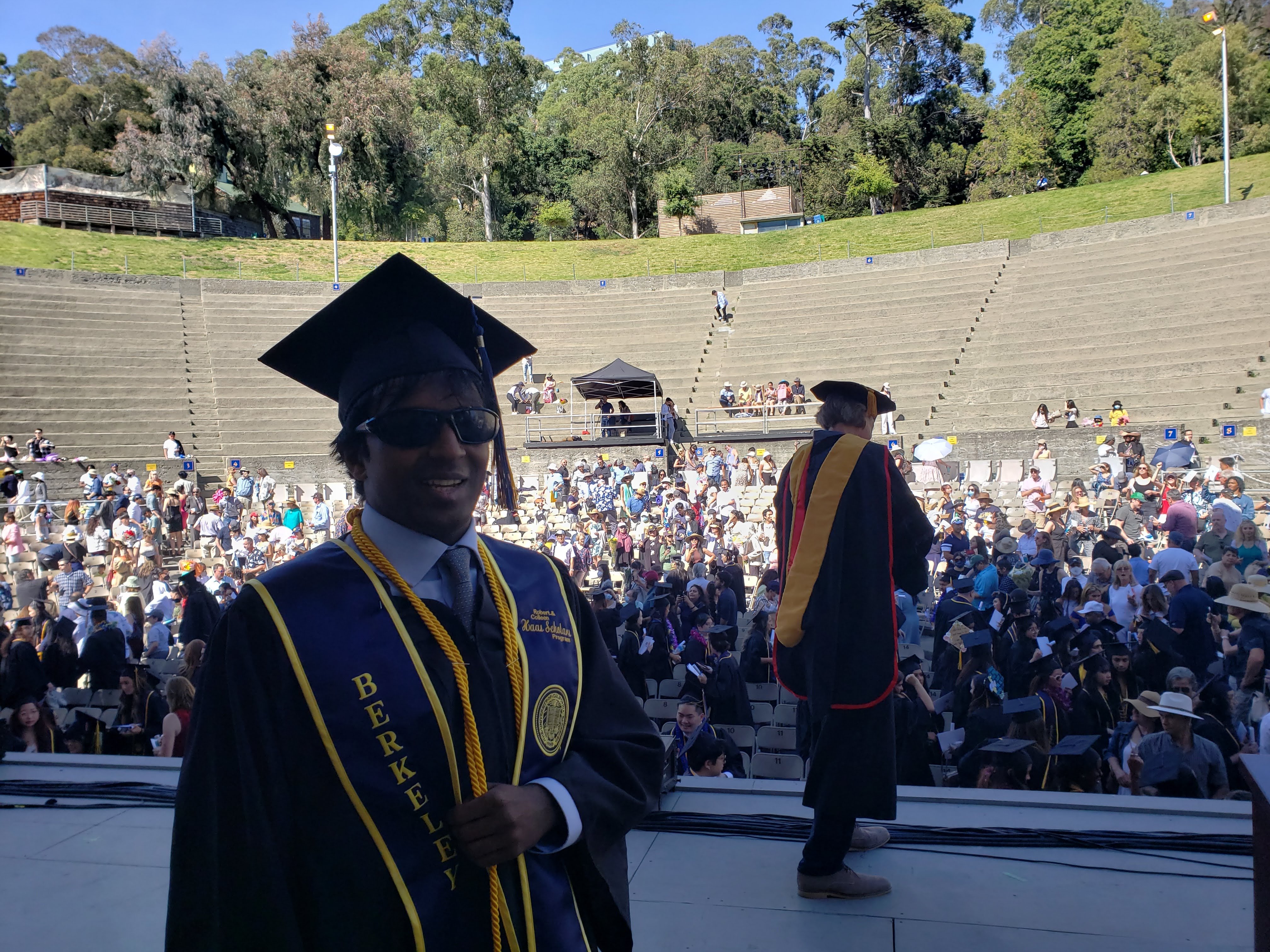 A fork on road was discovering a mode of communication with use of alternative augmentative device (AAC), which took Hari out of the school district and into a charter school. The scholar shares, “The school’s first psych-ed assessment placed me at XII grade for math and college level for English. All of a sudden, I started studying algebra, biology and Shakespeare and loved all of it. The very first essay I wrote in class went onto winning a National Scholastic Gold Medal which I received at Carnegie Hall in New York.”

Intellectually stimulated, Hari did a ton of creative writing, including several poems and short stories, which won him several awards at state and national level. “Then Viji Dilip who ran a nonprofit asked if I wanted to be editor for a free braille mag and that kind of how I got a foot into advocacy,” shares Hari, who is a human rights activist as well.

Having denied studying at a regular school for several years, Hari took his education very seriously. However, while he dreamed of earning degrees someday, he realised that he will have to take one step at a time to achieve his goals. “My parents and I have never taken my next education steps for granted. After all I still have a ton of disability challenges. Frankly, at one point it did not look like I would even get a high school diploma. It was only after I finished my high school that we started looking for a college for me,” Hari shares, adding that it was his therapist, who informed the family about community colleges.

The scholar soon joined the San Jose City College, but that wasn’t enough for him. “I had applied to several colleges. When I learnt that UC Berkeley accepted my application, I was super thrilled. After all its the birthplace of disability rights movement in this country,” he says. While getting into UC Berkeley was one thing, getting immense support from his faculty and peers. “Berkeley has been transformational truly,” shares Hari, adding, “I had supportive faculty, non-judgmental peers and also a nudge to literally go out and be part of the change you want to see in the world. No one said no. Which makes a world of difference and also gave me courage to try out different opportunities.” 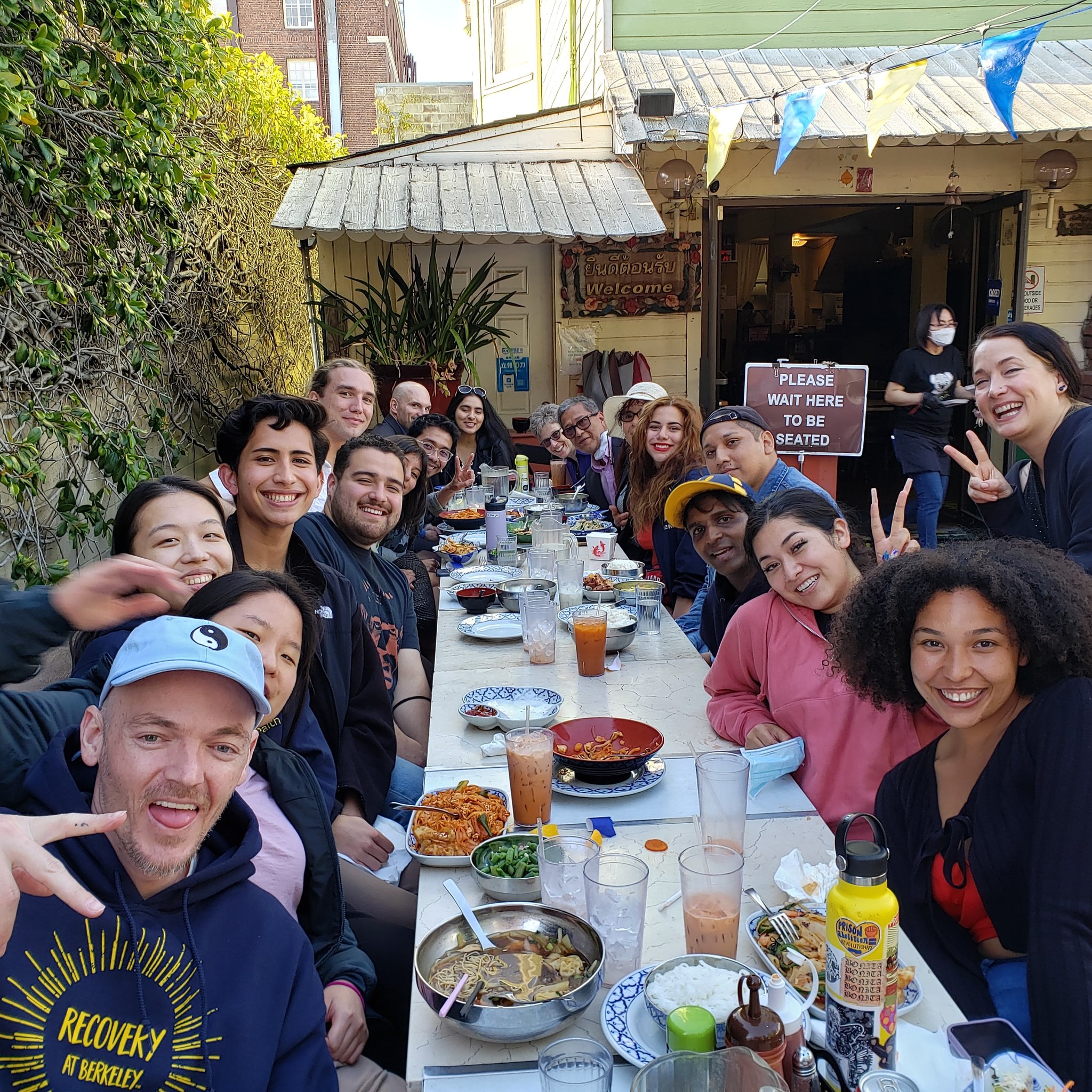 Hari along with the Haas Scholar cohort

Hari’s honors research was on the emotion of awe in autistics and how it diverged from how that emotion is felt and understood in the non-typical population. Apart from his academics, Hari was involved in several clubs and other extracurricular activities like writing for the student-run The Daily Californian, getting involved in Spectrum at the University and also running the autism class. Slowly, Hari started taking part in activities outside the University campus as well. “I was one of the three students highlighted on President Obama’s Instagram on the 30th anniversary of Americans with Disabilities Act. In fact, I am al the University Medal finalist (top 5 in graduating class of 11000 students) and winner of the Psychology Department citation award,” shares the scholar who has been honored by some of the most prestigious societies in USA, including Psi Chi and Phi Beta Kappa. 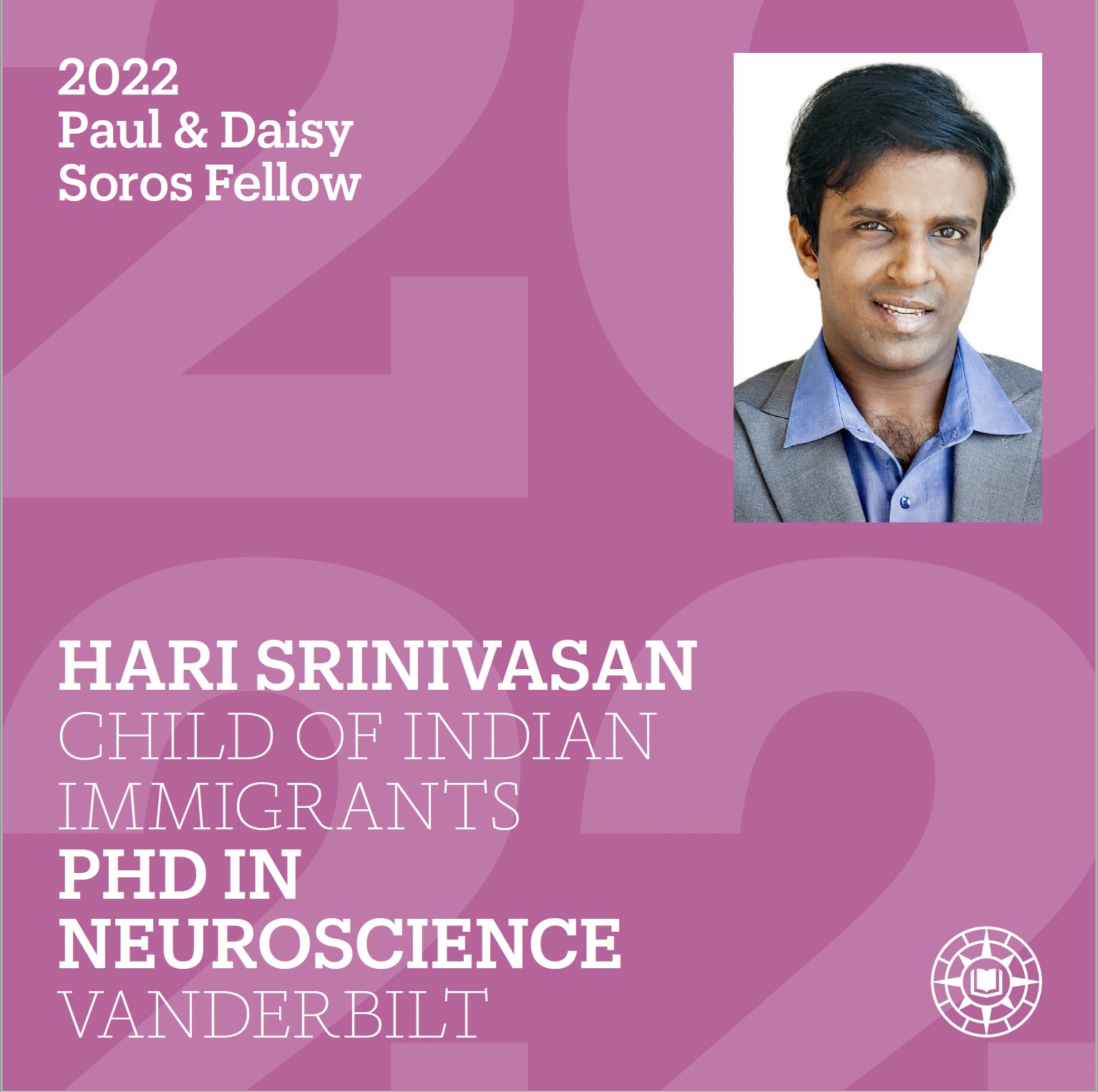 Recently, the youngsters, who is also a published poet, received the Paul & Daisy Soros Fellowships for New Americans. “I do have some time to come with an exact research topic for PhD,” shares Hari, who plans to do his research work at Vanderbilt University. “My work will focus around the human nervous/sensory system. However, I am yet to narrow it down.”

What’s with Indian-Americans and the US Spelling Bee contest?