(May 10, 2022) A 250-member team and 1,50,000 students impacted from around the world, all in under two years. The teen changemaker Aryan Maggo founded Optiverse in August 2020, when he was a tenth-grade student at Laxmi Public School, Delhi. Now, at 18, he’s gearing up to write his twelfth-grade exams and carve out his own path as an entrepreneur, like Steve Jobs and Elon Musk, his two big inspirations. Aryan won the Young Achievers’ Award 2021 and was named a Harvard Innovation Fellow that same year. In the summer of 2022, he will participate in LaunchX, touted as the world’s top acceleration programme for students, founded by alumni of the Harvard Business School.

“My interests? Oh, photography, theatre, reading and writing, entrepreneurship, I have my own YouTube channel and have been doing theatre for the last few years.” Aryan rattles of a long list of hobbies without pause. Evidently, he likes to explore new things, from “basketball to tennis, I have tried it all.” His desire for discovery is constant, even if he doesn’t always excel at everything he does. It’s all part of the journey of self-awareness – in Aryan‘s mind, understanding the self is the most important part of all. It’s also why he founded Optiverse, as a means to help students from all over the world find themselves and realise their potential.

A whiteboard stands behind him and Aryan often pauses during the conversation to make a note or two, handwritten into a book on the table beside him. “People ask me how I balance school and work and everything else. I always say, there is so much time and we waste it without realising we’re doing so,” he says, adding, “I have a bunch of books for different things.”

Aryan had just finished his 10th grade exams and, “felt there was something missing in the students around me.” The pandemic had just begun and Aryan found himself cut off from his old friends. “My peers were always talking about the things that got them down – terms like depression and anxiety were part of daily use.” Pointing out that Optiverse does not in any way deal with mental health or psychological therapy, Aryan explains, “There was a lot of focus on the negative things in life. And I thought, why don’t I do something to help?”

He also recalls a short composition by a junior in school, was asked to write a paragraph describing himself. The boy had written his name, his favourite food, his age and his favourite sports. “I thought, this kid probably has a good idea of who he is but he never shows it nor applies that potential. There’s more to life than just academics, after all,” he tells Global Indian.

This is where he returns to the Socratic idea of self-awareness. Optiverse is run by students, for students and provides mentees with a six-hour course, divided equally into six sessions. They are put through a set of activities, discussions and questionnaires, acquainted with life maps and design thinking, identity building, decision making and the other parameters “necessary for character development.”

A group of students not yet out of high school are bound to have a hard time proving themselves – a challenge Aryan and the Optiverse team have faced many times. “A lot of our work involves making organisational pitches to potential stakeholders,” says the teen changemaker. They have networked with organisations, schools, colleges and NGOs around the world. This includes Lady Gaga’s The Way Foundation and a George H.W. Bush Points of Lights Awards.

Recognition comes from all over the world not just because Aryan works with students in foreign countries. Instead, the idea that is the essence of Optiverse, has merit and application that far transcends conventional borders. “Run by students, for students, we give our mentees a better perspective of their skills, strengths and talents,” Aryan explains. While most of their mentees are teenagers, they do meet the occasional thirty-something too. “It’s about gaining insights positively,” he remarks. Optimism and positivity are their core values – baked right into the organisation’s name. “We believe it’s the foundation of whatever you dream of achieving,” he adds. 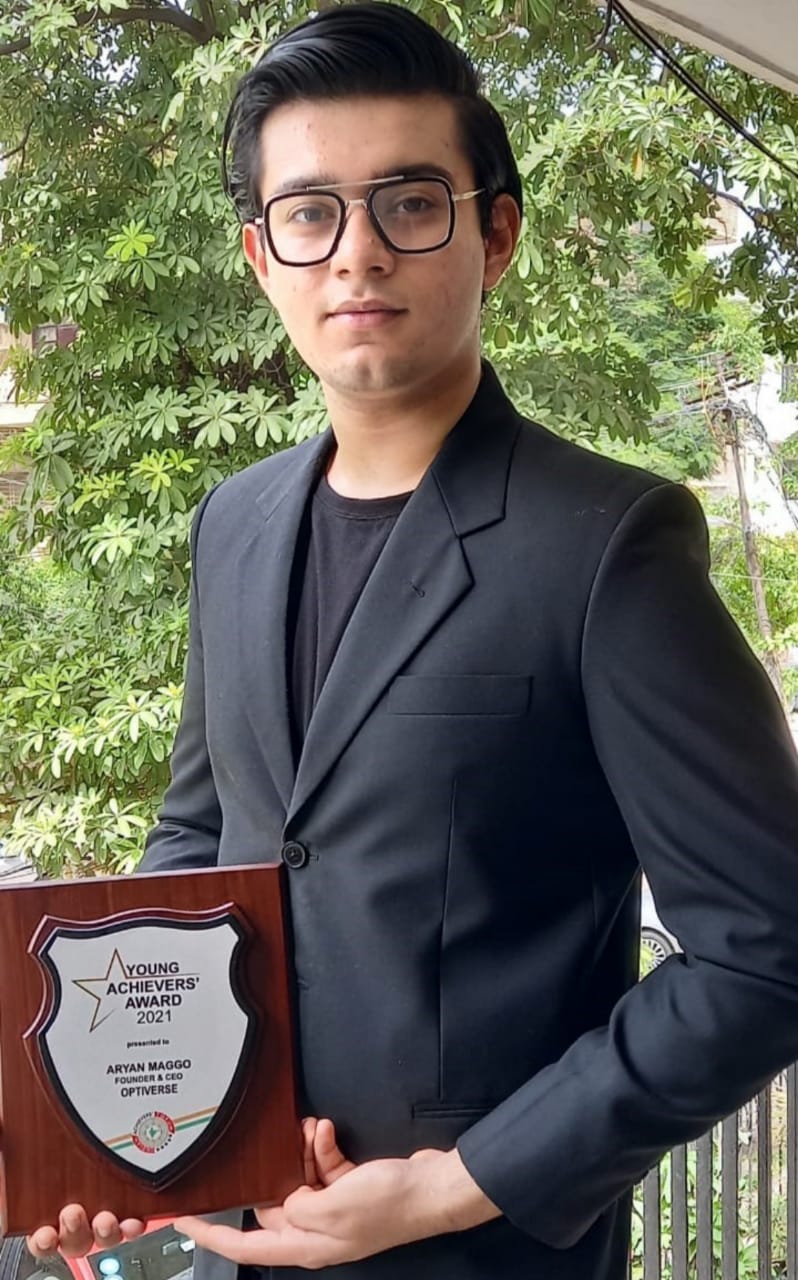 The system itself is completely free and an advantage, Aryan says, is that the mentor and mentee are almost the same age. “Usually, you have adults counselling children and there is a sense of a gap there. With Optiverse, that is not the case – students feel safe and are willing to open up to someone their own age,” he proffers. The mentor and the mentee usually do the course together, too. “The students who have benefited from us promote our work,” he explains.

Collaborations are the backbone of what Optiverse does, as is training young people to put the programme forth. Trainers are brought on board by Aryan, after a month-long selection process. “They do the course themselves during that time. By the end of it, they know what question to ask and when. They know how to respond to the questions that come their way,” says the entrepreneur. Through this method, the team has grown to a strength of 250, compounding the number of those who have been impacted. “We don’t keep track of how many mentees we have,” Aryan explains, adding, “We make note of those who were happy with the programme.”

Optiverse will always be part of his life. “I see so many students starting up organisations and closing them after school or college. I don’t want to do that. 30 years from now, Optiverse will remain part of my secondary life, if not my primary life,” adds the teen changemaker.

What the future holds

“The biography of Steve Jobs was the first big book I read,” Aryan smiles. That happened soon after his tenth grade, around the time he started Optiverse. “He is a visionary.” Then there’s Elon Musk, the unpredictable billionaire who dabbles in everything from space to social media – a maverick quality that Aryan no doubt admires. “Entrepreneurship is where I see myself,” the teen changemaker speaks with great conviction. “I see myself being part of many startups which also work on the UN Sustainable Development Goals.”

This summer, he will head off to LaunchX to build a startup from scratch. “I have a 100 percent scholarship,” adds the teen changemaker. During the programme, he will begin with a business pitch and have a business that’s ready to launch by the end of the month-long programme. With mentorship from experts all through.

OptiverseX is his latest endeavour, an ambitious bid to bring 50 student organisations together around the same table, fighting for all SDGs under one proverbial roof. “Lots of people and businesses focus on one or more SDGs. Here, will be working with all at the same time,” he concludes.