An award-winning storyteller, podcaster, former monk, life coach, author – the 33-year-old juggles several hats. But it’s his purpose to inspire people and help them find their calling that has made him popular across the globe.

It’s personal transformation that’s Shetty’s dharma. He made a 180-degree shift in his life more than once and now he’s on a mission to transform others’ lives. But his journey hasn’t been a bed of roses.

London was Jay’s playground for the first two decades of his life. Born and brought up in a Tulu family in North London, Shetty was the perfect child, until he decided to go rogue in his teens. From drugs to violence, Shetty dabbled in all and was thrown out of his school three times. At 16, he lost two of his closest friends – one in a car accident and another in gang violence. It was a confusing period for him as the tragic events made him do some deep soul searching.

“I was lost at that time; I really didn’t know what I valued. The troublemaking wasn’t fun – it was full of fear and guilt,” he said in an interview.

He soon enrolled in a business school and was keen to make it big. Inspired by the stories of self-made entrepreneurs and the CEOs, it was the success that Shetty was chasing after. However, a chance encounter with a monk changed it all for an 18-year-old Shetty.

A college graduate who traded his suit for robes

It was a regular day at college when his friend invited him to attend a talk by a monk. A reluctant Shetty was armed with enough excuses to turn the offer down, but it was the promise of a pub night later that cajoled him into giving in. The monk, Gauranga Das, was the complete opposite of everything that Shetty held valuable at that time. Dressed in robes, the monk was an image of austerity. He had shunned every material thing that Shetty was feverishly chasing. He was so captivated by the monk’s message on service that he followed him around the UK on his speaking tour and spent the next few summers at an ashram in India.

In a conversation with National Geographic, Shetty said,

“This monk [Gauranga Das] came and spoke at my business school. He was so inspiring in a way that no CEO was. He spoke about selflessly sacrificing what was available to you to serve others, and that became a very attractive concept to me. I thought to myself, I want to do something meaningful with my life.”

So at 22, Shetty decided to trade his suit for robes. He left London and moved to an ashram outside of Mumbai to become a Vedic monk.

“I turned down my graduate job offers and decided to go and live as a monk. I shaved my head, slept on the floor, woke up at 4 every day and all of my possessions fit inside a gym locker,” he revealed in one of his videos.

The next three years of his life were filled with service where he helps build sustainable communities, feed the homeless, and teach meditation. He meditated for 4-8 hours a day and learned ancient practices of breath and mind control. He studied Vedas and philosophies of the east in great depth.

“When I became a monk, it didn’t feel like I was giving up that much. I actually felt like I had made the best decision because anyone who hadn’t focused on building themselves up was the one losing out,” he told Success.

The monk who gave up his robes

After three years of living a monk life, Shetty started to feel that he had a higher purpose of sharing knowledge with the world. He mustered up the courage to confide in his guru Radhanath Swami who gave him the blessings to choose his path. 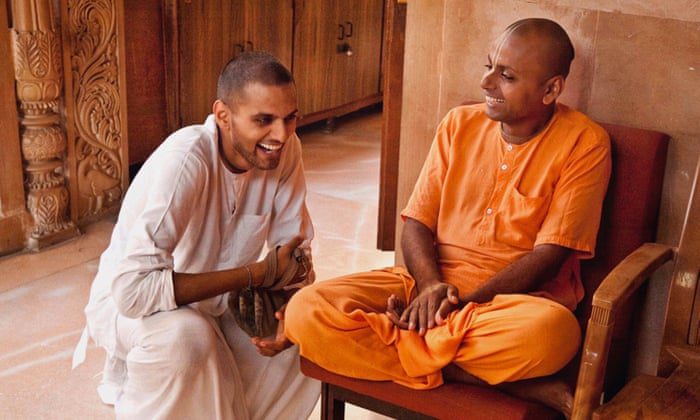 “I felt that if I stayed where I was, I wouldn’t be able to serve in a calling of wanting to share what I’d learned in a more powerful way with the world that I came from, as opposed to the world that I’d adopted,” he added.

He moved in back with his parents after an almost career suicide. With nothing to show on his resume for the last three years, Shetty spent 9 months updating himself on the world. He realized that the world had majorly gone digital in his absence and he used this very tool to spread his message. He became Accenture‘s Social Media coach for executives online branding and digital strategy. He began to figure out how to use mindfulness in the corporate world.

Things changed for Shetty when Arianna Huffington saw one of his motivational talks and offered him a spirituality show on Huffington Post. Shetty packed up his bags and moved to New York in 2016. In no time, he was interviewing the biggest names in the industry like Deepak Chopra, Tim Ferriss, and Russell Simmons.

After his short stint at HuffPo, Shetty started to create his own videos and work on his own brand. In the last five years, Shetty has made more than thousands of videos for YouTube and Facebook, has acquired a strong 8.6 million followers on Instagram, and started his own podcast – On Purpose.

Shetty has become synonymous with mindfulness and self-growth. People across the globe look up to this life coach for guidance on finding purpose.

After influencing millions of people with his wisdom through coaching and inspiring videos, Shetty released his best-selling book Think Like A Monk (a combination of memoir and self-help advice) in 2020.

“As young people, we’re not exposed to two things enough: a diverse range of role models, and a diverse set of experiences. Those are the two things that change people’s lives. What I’m trying to do is use the online platform to create a world where we’re exposed to a lot more role models and a lot more experiences to expand the way we think and connect dots,” he added.

It’s not every day that you come across a life coach who has lived as a monk. And that too, when he was as young as 22. That’s what makes Jay Shetty stand out among many motivational speakers. A Britisher of Indian descent, Jay learned the ancient Vedas during his monkhood and decided to spread his learnings in the real world. The Forbes 30 Under 30 life coach is guiding millions of people in finding their purpose. Born in Chicago, settled in India, Anjum Babukhan set up a school that makes a difference