In Edison, New Jersey, a seventh grader works tirelessly to rid the world of battery pollutants, aspiring to make the world safe from fires. Interestingly, his campaign also started when a fire at a waste plant in California caused million of dollars’ worth of damage. When Sri Nihal Tammana read about it on his tenth birthday, he realised the culprit was a discarded lithium-ion battery.

That became a clarion call for the 12-year-old to start a campaign to rid the Earth of used batteries. It galvanised the community, and like-minded children to begin collecting and recycling all types of batteries. Most importantly to save the planet. The little boy founded recyclemybattery.org which has grown exponentially since it began in 2019. Collaborations with Call2Recycle, today there are recycle bins in 200 US locations, and the non-profit is also working with US school superintendents, covering over 200 schools (200,000 children). 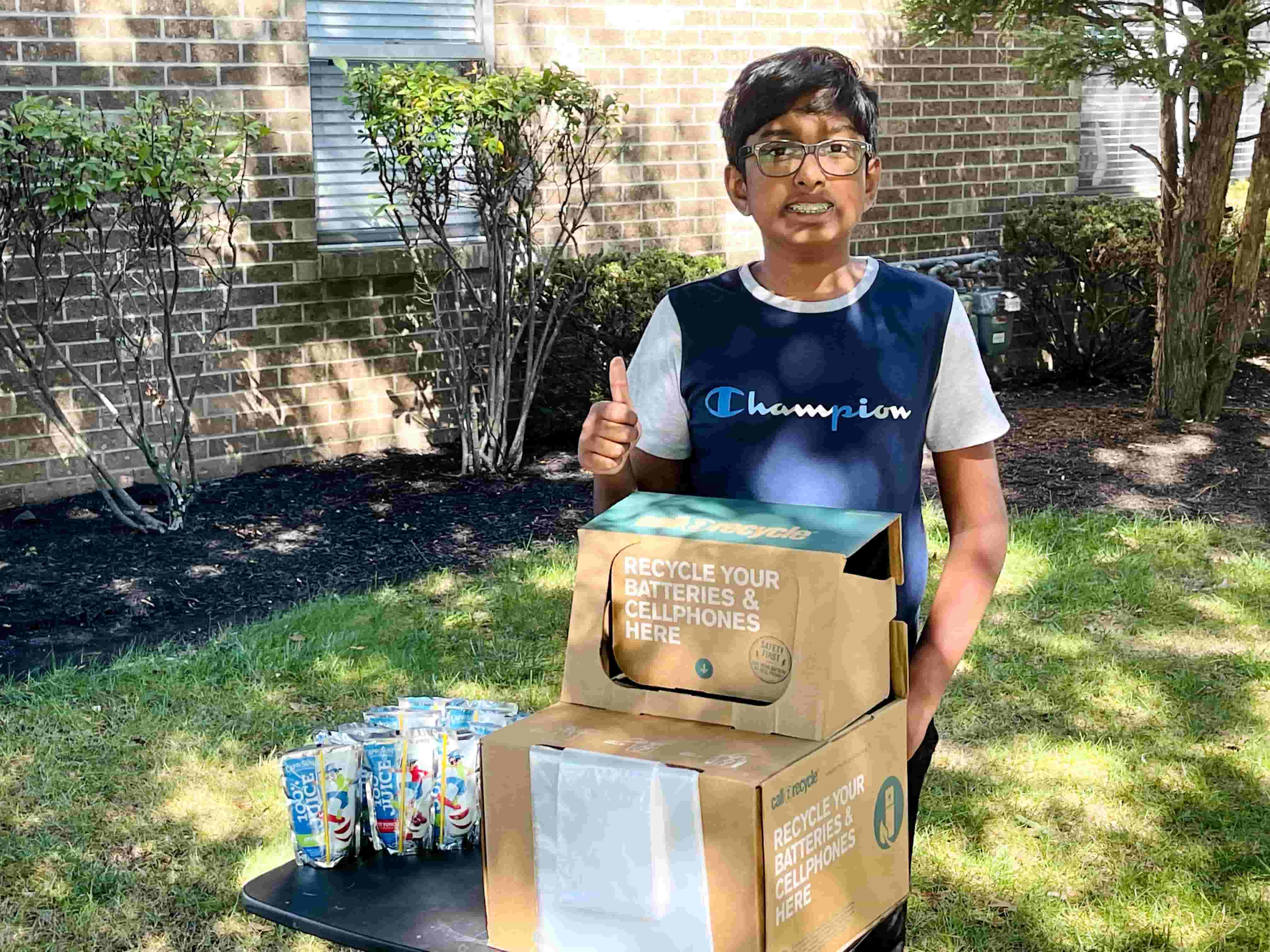 “I started to learn about all types of batteries, and how chemicals cause pollution when they end up in landfills, poisoning groundwater and damaging the ecosystem. I realised that our entire world is powered by batteries, and they are only going to be more widely used. I founded Recycle My Battery to address this,” says the pint-sized TEDx speaker, environmentalist, eco-hero and Point of Light honouree.

His large, observant bespectacled eyes light up at the mention of science and sustainability. The winner of the NJ Governor’s Award and the Jefferson Award for his work, Nihal has a sensibility that defies his years.

The method to the research

The Woodrow Wilson student, Nihal researched on how to prevent batteries ending up in landfills, and it was a huge turning point that has been the guiding light that is slowly creating a change. “I started RMB to reduce the 15 billion batteries that are carelessly thrown away each year to zero. We have an amazing team of over 150 kids, and have achieved so much in the two years thanks to my team! We have recycled over 145,000 used batteries so far, and educated over an estimated one million people.” Now, Nihal hopes to reach India with his campaign. 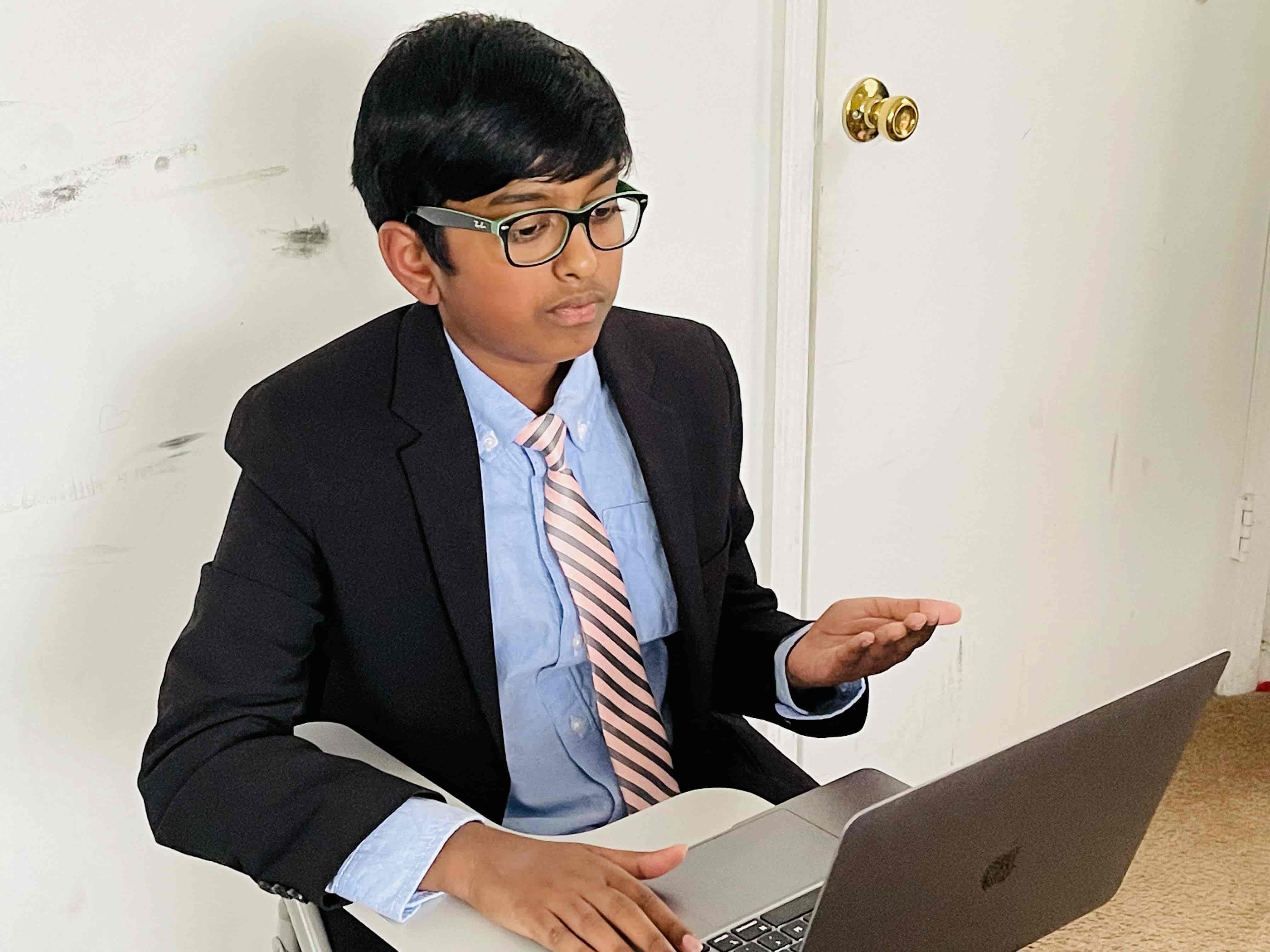 Always thinking ahead, partnering with Call2Recycle and Best Brains helped spread RMB’s wings across the US. Call2Recycle offered free battery bins while Best Brains helped right from initiation, advising on where to place battery bins in over 150 locations. Today, 145,000 used batteries have been recycled and the team has educated an estimated one million people on battery disposal, etc.

The 2009 March-born student has been STEM-inclined since he was a toddler, and thus math and science were his favourite subjects.

Infact, Nihal already had dreams of becoming a successful entrepreneur even though his parents were concerned that he was too young to start an organisation. He started it, anyway. At age 10, news of fires and lithium-ion batteries put him well and truly on this path. His younger sister is in awe while his parents who work in IT, and are extremely encouraging, especially his father, “He kept motivating me towards my dreams. Without him, I wouldn’t have started my organisation!” says Nihal. Nihal loves speaking to his grandparents in Vijaywada, India, and often regales them with his stellar achievements.

From recycle to spreading awareness

The TedX speaker admits sheepishly to being extremely nervous on the podium, and it took two months of practice to prepare for his TedX speech. The Eco-Hero awardee is a 12-year-old who has only just begun tackling world problems. With the help of more than a 145 strong childrens’ team, today RMB has placed more than 250 battery bins across the US. “We have also won 15 plus national and international awards,” chirps Nihal.

The PEYA Award is what Nihal cherishes the most, One in a Million Award, NJDEP Recycling Award, Citizens Award, Nihal is thankful for the acclaim and attributes it to team effort, and the partners who supported his dream.

If STEM subjects bring a glint to Nihal’s eyes, he is also a proficient artist, and has won national awards for his distinctive drawings, one of which is shared below. “I have loved art and drawing since I was little. It was super creative and fun to draw, and impress everyone. I drew frenetically just to pass time – 100s of drawing, and I have gotten many awards,” says the achiever who seems earnest and adult in demeanour.

The boy who has received appreciation from New Jersey state senators Bob Menendez, Sam Thompson, Patrick Diegnan and Vin Gopal, and Edison Mayor Thomas Lankey, exudes a wisdom beyond his years, and is grateful for their support which has furthered RMB.

As other children were gaming or playing tag, Nihal went CEO hunting to ask for support. That came in the form of kudos from Kevin Kassekert, COO of Redwood Materials, among many others.

Experience and impact has already given Tammana the depth to charter new paths in his life. His research-minded proclivity takes him forward, “I tend to do research to learn more about the environment, waste management, and recycling! When I see the battery bin is full, I feel very proud that people are using the bins that we place,” says Nihal who still has ample amount of schoolwork to do, his first priority. After that comes RMB work, and of course, research. 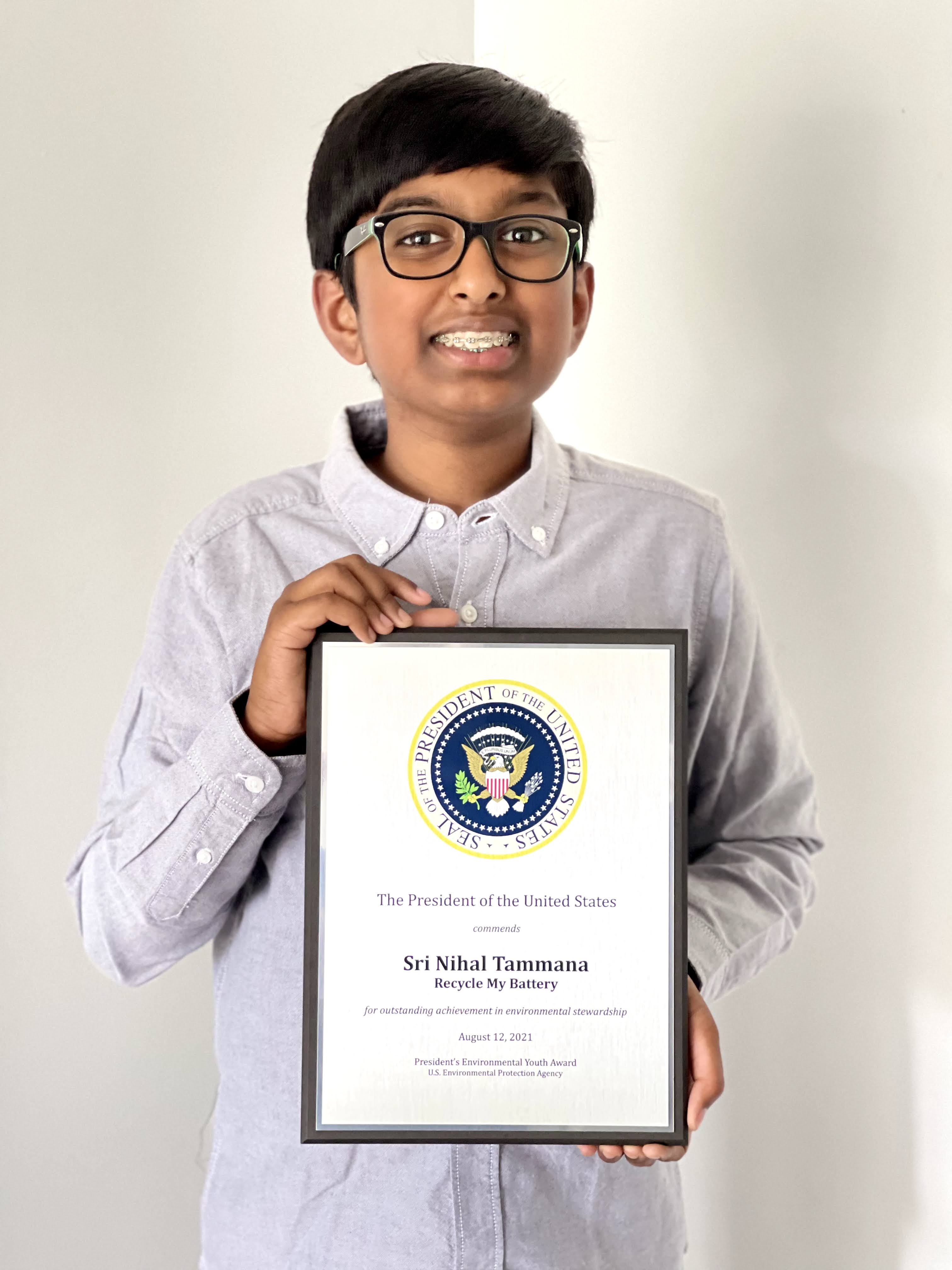 Busy increasing RMB’s influence across the US, the 12-year-old was also hired to research on waste management by an Indian firm. “I was recently hired as the youngest research lead at the Delhi-based EnviroVigyan (started by a professor and some PhDs). I want to do more research to learn more about waste management now,” he adds. He also blogs for them.

Egged on in no small measure by parents in IT, Nihal now has a clear goal in mind – of studying at an Ivy League like Stanford, and learn about environmental science, business development, science, space science and math.

For budding STEM students, his advice is, “Always go after your dreams and never give up! Failure leads to success!”

Having the right mentors opened a whole world of learning and opportunities, and Nihal is grateful for the guidance of Professor Dr Madigosky, Call2Recycle ex-CEO Carl Smith and his dad who “has guided and supported me throughout my journey to bring down the 15 billion batteries thrown away each year to 0!” he smiles.

It’s not all work and no play, with doodling giving him the space to rejuvenate, playing and developing video games adding some fun, yet on any given day, reading and researching touts all else. 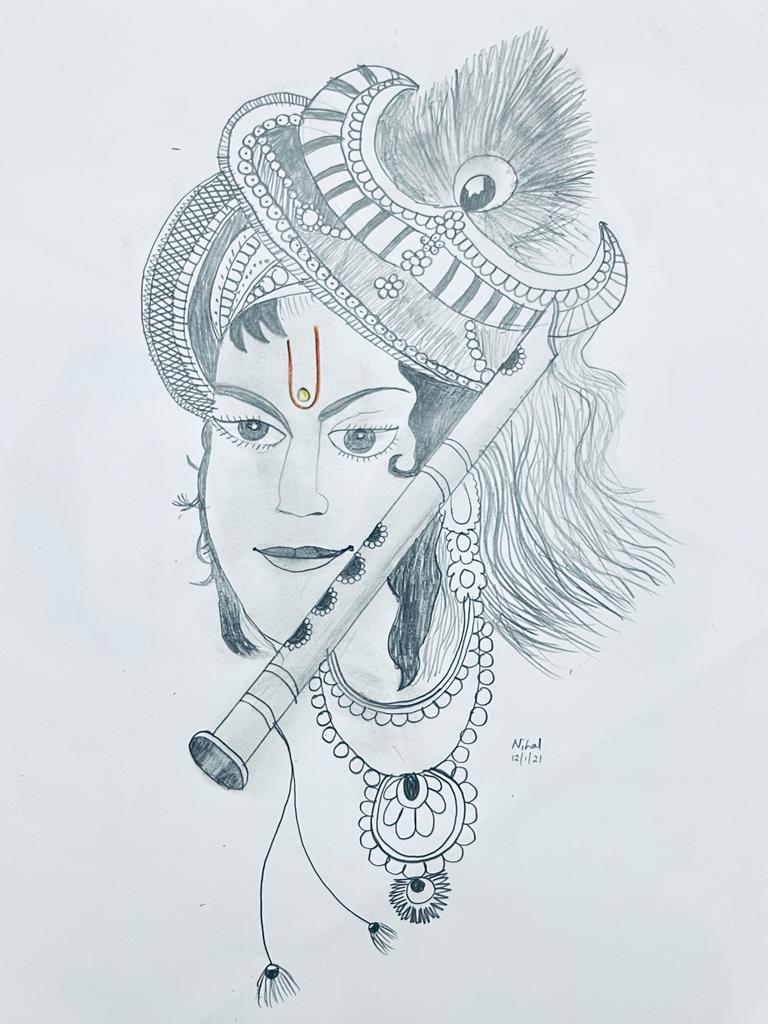 A doodle by Sri Nihal Tammana

“I practice martial arts, and recently got my black belt in Taekwondo. I love to learn about space. My dream is to become a space scientist. I hope to learn lessons from space to help us improve life on Earth,” says the boy who has his own YouTube channel Learn with Nihal, where he educates through videos.

“In my spare time I draw and have also won some national awards for my work. I like to develop and play games on Roblox with my friends,” smiles the boy who recently came third at a school geography competition, the GeoBee.

The world is his oyster, and Nihal is already thinking ahead, about how alkaline batteries help grow corn (which even the author did not know), and, a hopeful wish, “I want to start another company that can develop clean batteries in the years to come.” 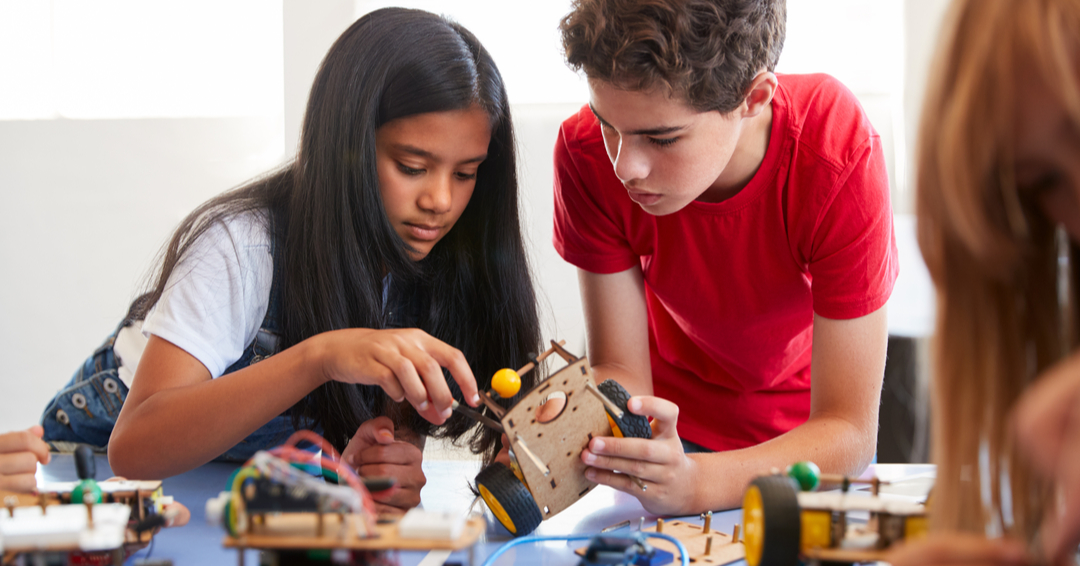