(January 25, 2022) Picture this: A sprightly three-year-old watches his father do yoga in his Sevenoaks home at Kent. Fascinated, he starts to emulate his father, and learns the basics, promptly. Cut to 2021, the 11-year-old brushes shoulders with British choreographer and actor Ashley Banjo while receiving the Points of Light Award from UK Prime Minister Boris Johnson for teaching yoga to children across the world during the ongoing pandemic. Ishwar Sharma is a yoga prodigy who is making the ancient practice popular among youngsters. “Yoga has been popular in the UK for the past five years, and people in other countries are also taking it up. I believe celebrating international yoga day has helped us to take this great practice to the world,” the Global Child Prodigy Award-winner tells Global Indian in an exclusive chat. 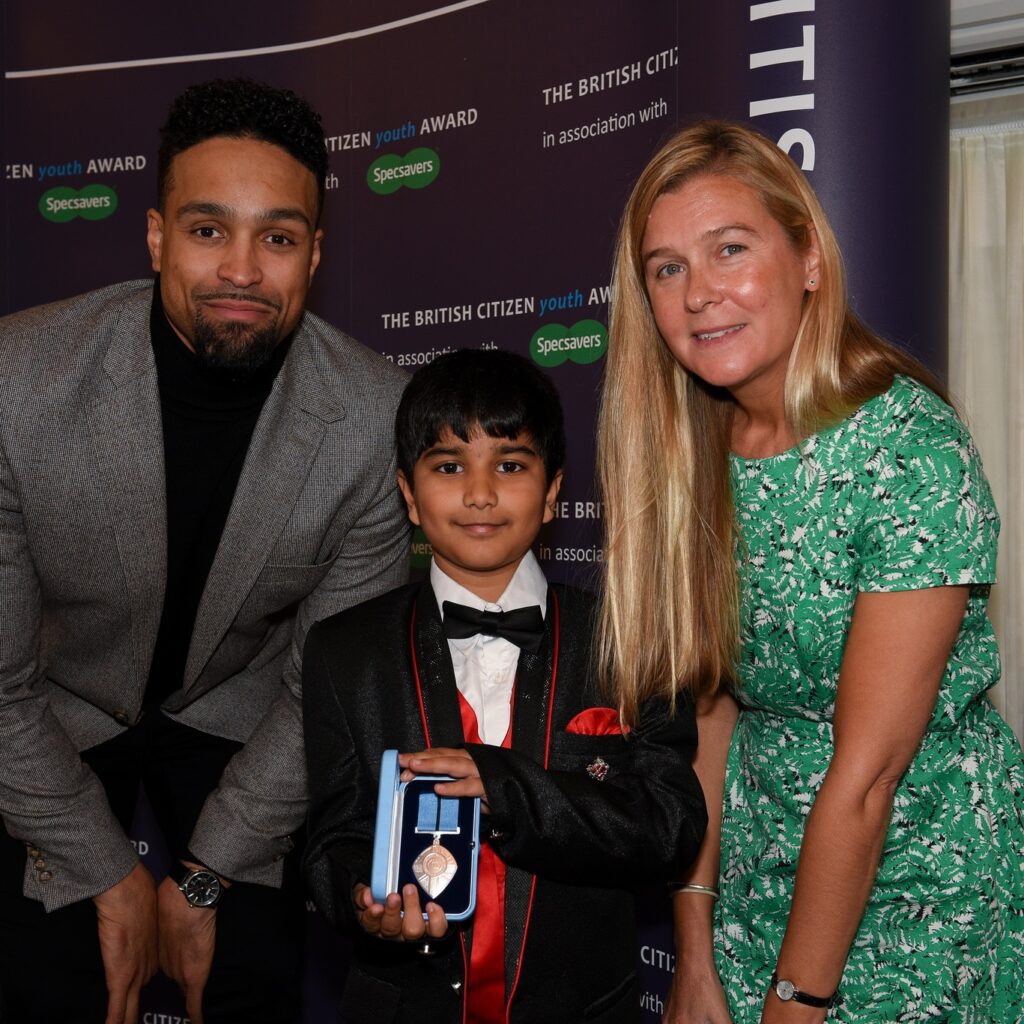 The three-time world yoga champion is now 12, and is on a mission to spread the practice to children everywhere. “It’s the best way to maintain mind and body balance. While pranayama meditation strengthens the mind and spirit, yoga asanas are perfect for fitness,” quips the boy who loves learning new asanas. He was just three when he saw his radiologist father religiously practicing yoga daily. A native of Mysuru, which is also the birthplace of ashtanga yoga, his father Dr N Vishwanath has been practicing for decades. His son soon followed suit. “I was fascinated, and started copying him. Since I learnt all the postures quickly, he taught me advanced postures too,” says the Sevenoaks resident who calls his father his first guru.

What began as a practice soon transformed into a blessing as it has helped this little boy who has struggled with autism and ADHD (attention-deficit/hyperactivity disorder) since birth, find inner peace and serenity. Emphasising the benefits of yoga, Ishwar chirps, “It helped me overcome stress and anxiety. I have learnt that by regular practice, one can remain physically and mentally healthy. It has helped me focus and concentrate on my studies too.” 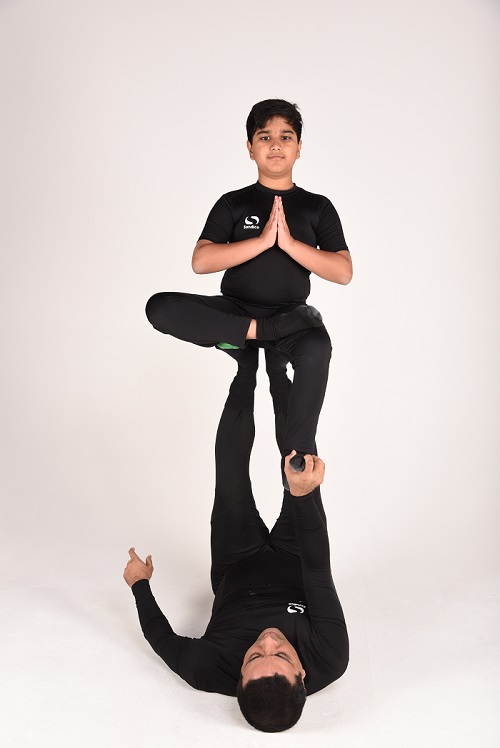 Sharma believes in yoga’s potential to improve the lives of thousands of children, especially those with special needs. And that’s exactly what he did during the 2020 lockdown when he gave free online classes to children across the globe to help them find calm amidst the storm. “During the lockdown, children were stuck at home. Many parents asked me to teach yoga to their children, and it was a perfect way to keep them engaged, and physically and mentally healthy,” adds the Class 7 student who received the Points of Light Award in 2021.

A ‘point of light’ for others

Calling the accolade a beautiful surprise, Ishwar smiles, “It is a recognition for yoga as a practice globally, rather than for me. It has definitely been a motivation for me to continue my work.” The yoga prodigy is honoured to take the discipline global. “I am ever grateful to the gurus who invented yoga, and the yoga asanas. I feel honoured to take the discipline to the world. I compete with myself to keep improving,” adds Ishwar whose favourite posture is vrischikasana (scorpion posture). 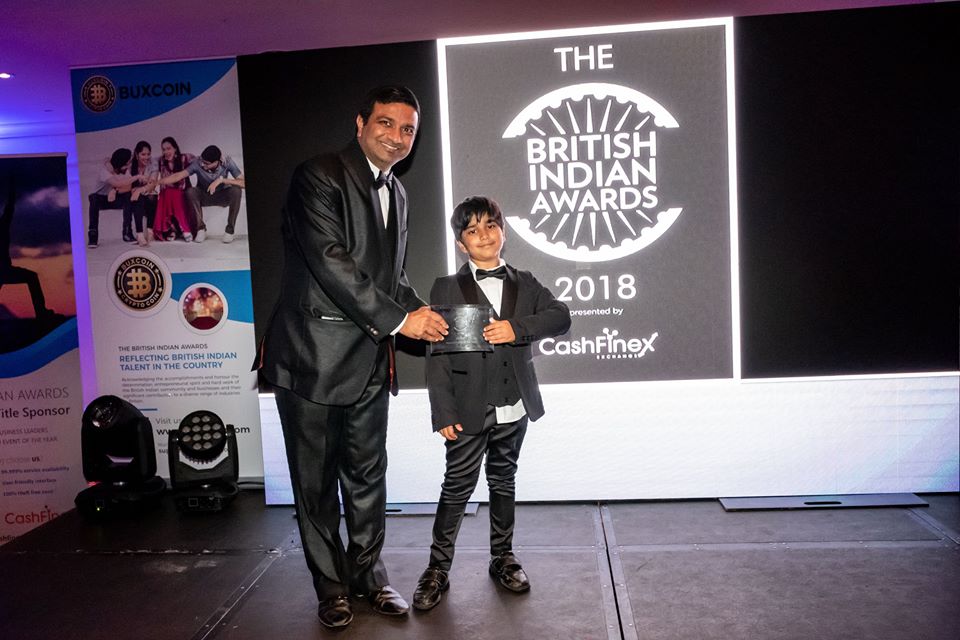 The yoga prodigy was six when he first participated in the U-11 UK National Yoga Championship and won a gold, a streak he maintained for three consecutive years. “My first international yoga championship was in Kathmandu (Nepal) where I won two golds,” says the diminutive yoga teacher who has participated in championships across India, Bulgaria, France, Canada, etc. In 2018, Ishwar was named the British Indian of the Year (young achievers’ category). Laurels keep raining in, and his passion for yoga keeps him inspired. “Yoga is a lifestyle choice. Competitions are just motivating factors to achieve perfection,” adds this brand ambassador of yoga in the UK.

It is the time to breathe

Keeping the teaching to traditional asanas, Sharma gives them a twist as he choreographs the postures to music. Calling it acro yoga or artistic yoga, Ishwar shares, “I found that many children start doing yoga but discontinue because of boredom. To retain interest, I decided to choreograph different yoga postures to the music of the Vedas, Upanishads, and Bhagavad Gita which made it artistic. So, acro yoga is a combination of yoga and acrobatics.” 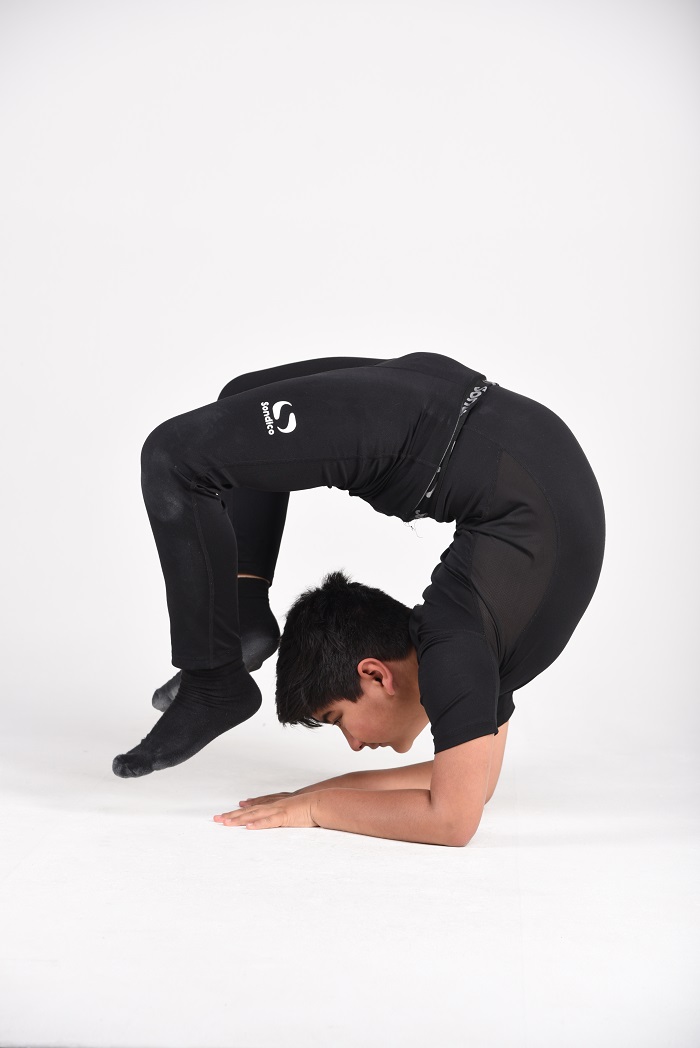 Yoga, as a lifestyle

Born in Durham City in 2009 to radiologist parents who migrated in 1999, Ishwar has a strong support system in his folks, who are also his biggest cheerleaders. “My family has been supportive – helping with finances, time and continuous support,” says the wonder kid whose dad spent most annual leaves taking his son for competitions. He is equally thankful to his gurus who he calls, “the wind beneath my wings.” He is happy to have gurus that moulded him, “My teacher Nutan Rameshwari has moulded me into a student for life. Sudhir Golwalkar is another teacher who is helping me. I am also influenced by Shri Baba Ramdevji with whom I have had an opportunity to perform on stage with, and Dr Nagendraji.” 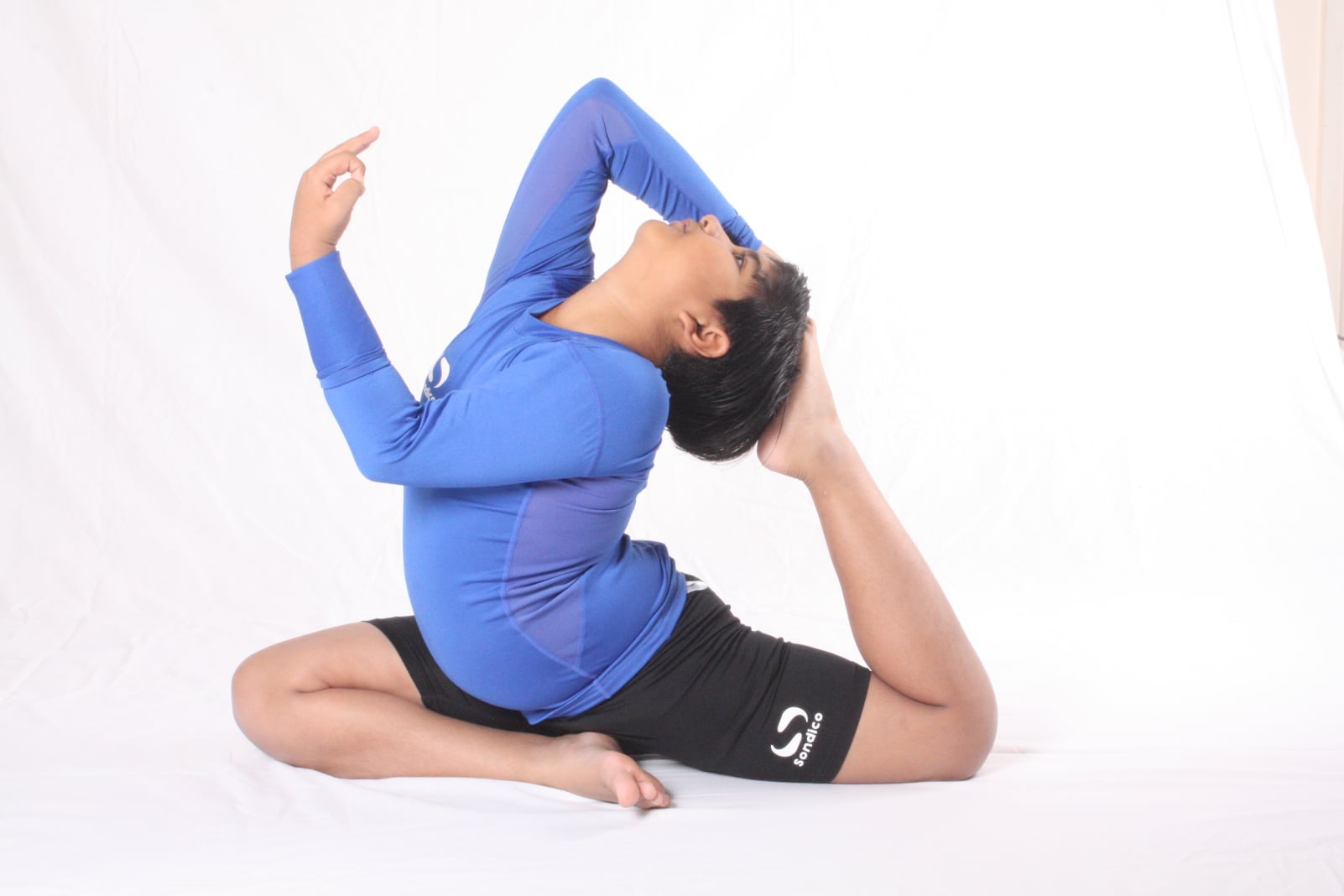 The Whitgift School (Croydon) student, Ishwar is grateful for the encouragement by his teachers. “My school is well-known for sports, and I am on a sports scholarship too. Yoga is a lifestyle, and practicing yoga helps me with academics,” says the pint-sized boy who can chant up to 50 shlokas from the Vedas and Bhagavad Gita, which has helped him improve his memory. The schoolboy also inspired his 10-year-old sister Indira to start yoga, who, “Won this year’s UK National Yoga Championship,” beams the proud brother.

Helping others as a part of the yoga teachings

A fan of Minecraft, Ishwar unwinds with video games, and badminton, chess and golf too. His passion for charity sets him apart – donating toys to children in Nigeria, feeding the homeless in Croydon under the supervision of his guru Maheswari. “Helping others is a part of the teachings of yoga. I am involved with the Rotary Club, and recently did a surya namaskar session with rotary clubs in Ghana and India,” says the boy-child-yoga-pro who was nominated as the Community Hero of the Week in August 2020 by Sevenoaks MP Laura Trott. 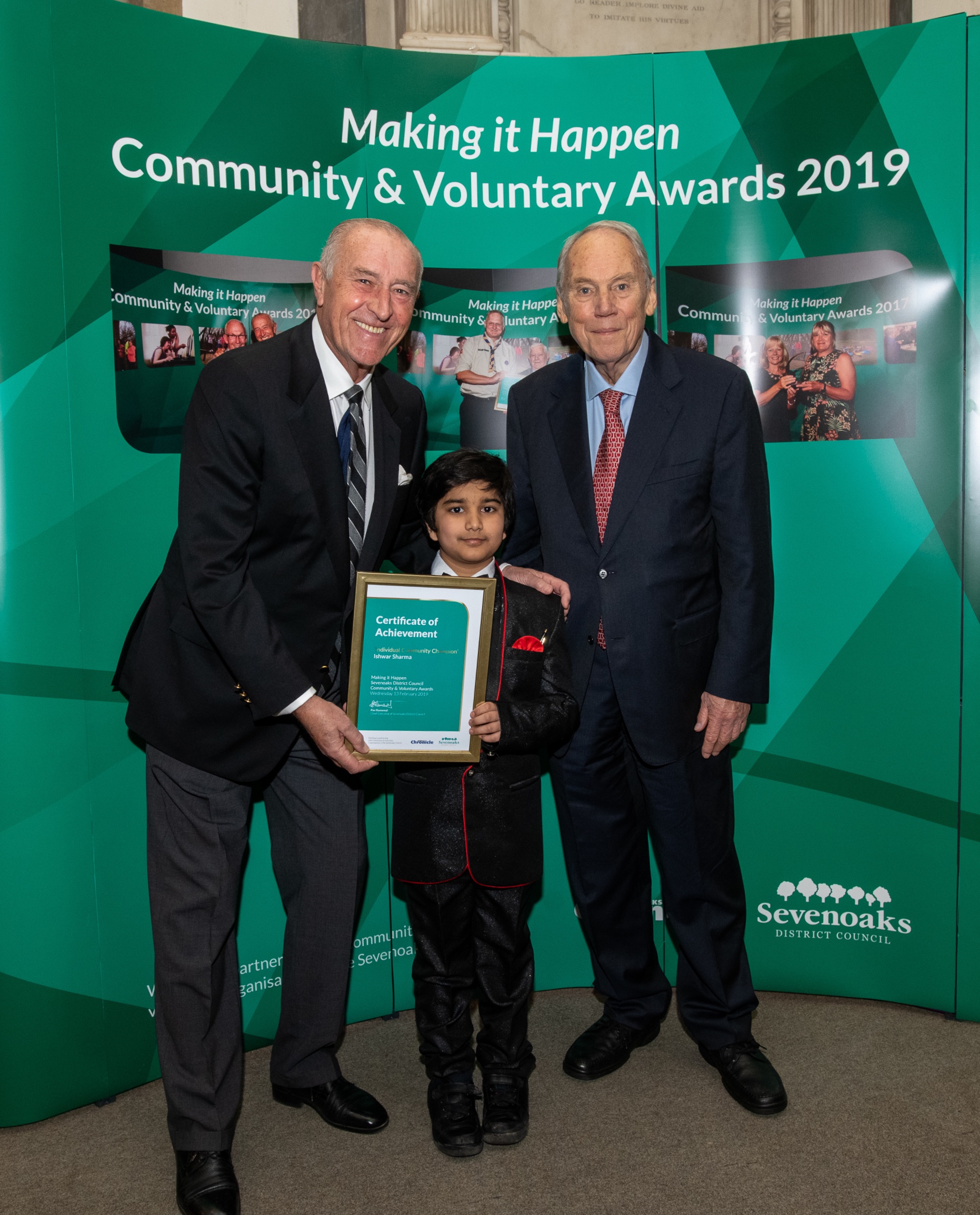 Ishwar believes in the power of yoga, and also gives free online sessions. “Yoga helps children imbibe discipline, and boost physical and mental health. It improves focus and concentration. I am one of the biggest examples as it has helped me overcome my autism and ADHD symptoms.”

Now, he has his heart set on the Olympics. “I do hope yoga will be included in the Olympics soon,” says the yoga prodigy. “I believe doing your duty with perfection is yoga. I think everyone should enjoy what they do as it makes life easy and stress-free,” says the boy teacher.