(November 30, 2022) In 2017, two people were killed in East Delhi when a large mound of garbage in the Ghazipur landfill collapsed, sweeping people in the vicinity into a nearby canal. Spread over 70 acres, with a mountain of garbage higher than a 15-storey building, the lethal collapse was one more alarm bell in a city that was already choking. Watching the tragedy unfold on the news were Vihaan and Nav Agarwal, two siblings in Delhi. “The next day, the whole city was engulfed in a blanket of smoke. When we read about it in the newspaper, the connection between waste and air pollution became clearer,” Vihaan said. Delhi generates 11,144 tonnes of trash per day and up to 250 tonnes of municipal solid waste is burned every day, releasing 2000kg of PM10 and 1,800 kg/day of PM 2.5. Over one-third of the air pollution in Delhi is caused by burning waste in landfills.
Vihaan was 14 at the time and Nav only 11, but growing up in Delhi had already taken a toll on their health, especially as Vihaan was asthmatic. Their time outdoors was severely curtailed, for the most part, they weren’t allowed to play outside. “We had five to six air purifiers at home, and we were not allowed to play outside. We had online school even before the pandemic,” Vihaan said in an interview. 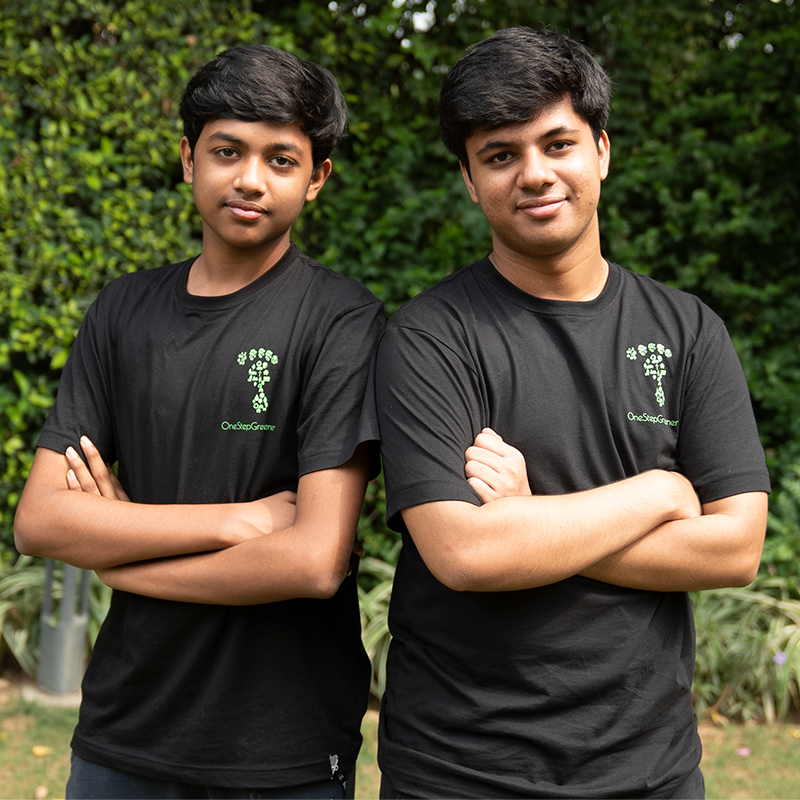 Leading the way by segregating at home

Taking inspiration from icons like British naturalist David Attenborough and the storied conservationist Jane Goodall, the brothers began separating their waste at home, setting aside the recyclables. “The thought process in our mind was like, our waste shouldn’t go there, our waste shouldn’t become fodder for this fire,” Vihaan said. They collected such a mountain of trash that their grandfather told them sternly, and only half in jest, that one of them, either the boys or the trash, had to go.  However, they realised that their segregated waste was being mixed again after it was collected. When they contacted recyclers, they were told that they had too small an amount to be picked up.

The brothers rallied a team together through the neighbourhood WhatsApp group. In 2018, they founded One Step Greener, an organisation aimed at preventing pollution caused by waste.
It marked the start of the recycling initiative that would earn the boys one of the top awards for children – the 2021 KidsRights International Children’s Peace Prize. As they received the prize from Nobel Peace Prize winner Kailash Satyarthi, they entered an elite club of young, global changemakers, including Malala Yousafzai and Greta Thunberg. The Dutch prize includes an education grant and a cash award of 1,00,000 euros. “It’s an old saying, but everyone’s collective effort does actually make a difference,” Vihan said afterwards.

They started with 15 homes in 2018, and four years later, the organisation has grown to cover schools, offices and over 1,500 households across Delhi. They have plans to expand to Kolkata and thanks to the exposure the Global Indians received through the KidsRights award, there is a fair amount of international interest as well. The organisation also works to spread awareness about the importance of recycling.

Vihaan and Nav Agarwal haven’t seen their teenage years through yet but have a long list of accolades to their credit already. Vihaan is also the First Asian to win the Children’s Climate Prize, 2019 in Sweden and is an Ashoka Youth Venturer. Fifteen-year-old Nav has shown a talent for oration, which he uses to inspire people to join his green movement. He won the Children’s Climate Prize along with his brother, was a jury member of Times of India’s Young Change Leaders Contest, was named BBC’s Earth Champion, is the winner of the Global Social Leaders Award and the Action for Nature Eco Hero Award.