(October 16, 2022) A family trip to India was nothing short of an eye-opener for the Ohio girl Laalitya Acharya, who was a witness to the glaring water gap and the lack of access to clean drinking water and its implications. Seeing the damaging impact of contaminated water on health – leading to stomach flu and other ailments – made her dig deep into the statistics. In 2017, nearly 75 million people in India had no access to safe water. The startling numbers made her think hard, but after she fell ill from consuming contaminated water despite taking precautions, Laalitya knew it was time to make a change. “When I returned home, I found that this is a global crisis that affects billions all across the world. I decided that I wanted to find a solution to this problem and thus the foundations for The Nereid Project were born,” the changemaker tells Global Indian.

Nereid – a low-cost device that can detect water contamination within seconds using Artificial Intelligence – made Laalitya bag the Gloria Barron Prize for Young Heroes recently, for making a positive impact in people’s lives and communities. In the last few years, the Nereid Project has grown by leaps and bounds, and Laalitya calls it an organisation that “aims to raise awareness for the water crisis through research, advocacy, and policy.” They are now working on implementing Nereid in Ohio, India, and Morocco. 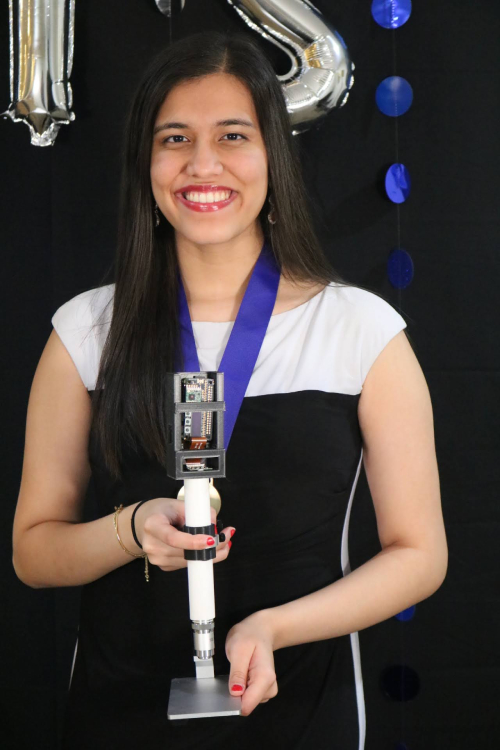 While Nereid has put this Indian-American teen on the global map, Laalitya’s interest in technology and science began at a tender age. The Bengaluru-born grew up in a suburb of Ohio after her parents moved to the US in search of better opportunities. Being a first-generation Indian American, “the importance of education was constantly emphasised,” and she naturally gravitated toward scientific experimentation. It was in high school that her passion flourished as she found herself participating in scientific research and science fairs. “My high school did not have a traditional research program, so I decided to do ‘at-home’ independent research instead. This was where the basis of my research, Nereid, began,” the changemaker reveals.

It was creative thinking that led her to explore scientific research, something she calls “crucial” to her journey. While most think science and creativity are separate entities, Laalitya begs to differ. “People tend to believe that science is not for the creative but I could not think that falser. All of the research and novel developments that we have, are born out of creativity, not in spite. The Nereid device, for example, utilises an intersection of biology, computational science, and artificial intelligence – it required unique thinking to create a unique solution,” she elucidates. 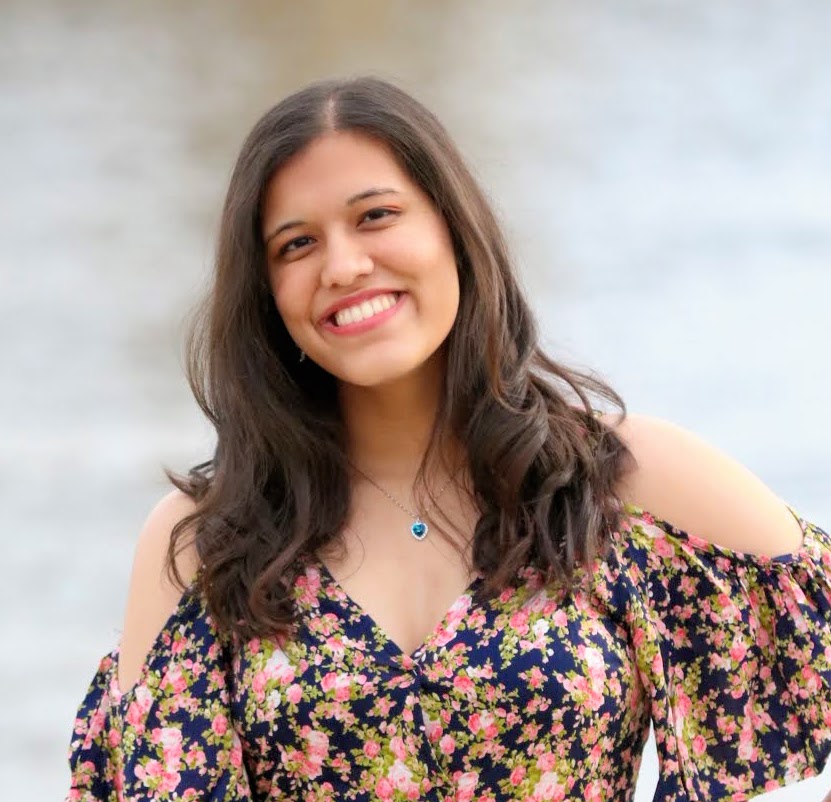 Making an impact with Nereid

So, what exactly is Nereid? It’s a portable device that works as a microscopic camera that takes images of a water sample which are then analysed using AI technology to determine if it’s safe or contaminated, thus helping to alleviate the global water crisis. Such is the feasibility of the device that it can be easily integrated into a water system. “The coming months will help me to gather real-world data to hopefully implement Nereid globally,” adds the changemaker. Not just this, the Nereid Project also expands to hosting STEM education programs and water summits which “are conferences centred around ways each of us can mitigate the global water gap.” Along with it, they are working to use the legislative arm of policy to ensure access to this global necessity for all.

Laalitya, who is currently majoring in biomedical engineering at Columbia University, is keen to work at the “intersection of STEM and public policy” to create legislative changes that incorporate science-based solutions. A STEM champion, she calls it the need of the hour to solve issues such as climate change or reform US healthcare. The 19-year-old is happy to see girls “crushing the game” in STEM. “The growth that I have seen even in my career of the science fair, and research has truly shown the power of women in science. I’ve also worked to create educational programs for young girls interested in science through The Nereid Project. Seeing their excitement and being able to support them on their STEM journeys has always been immensely gratifying for me,” adds Regeneron Science Talent Search 2021 finalist.

The young changemaker is taking baby steps to cause a tectonic shift in the world through her work, and is keen to see “a world where people have access to their basic human rights and necessities.” Knowing that the world is in crisis right now, she says, “it is our job to fix it.” 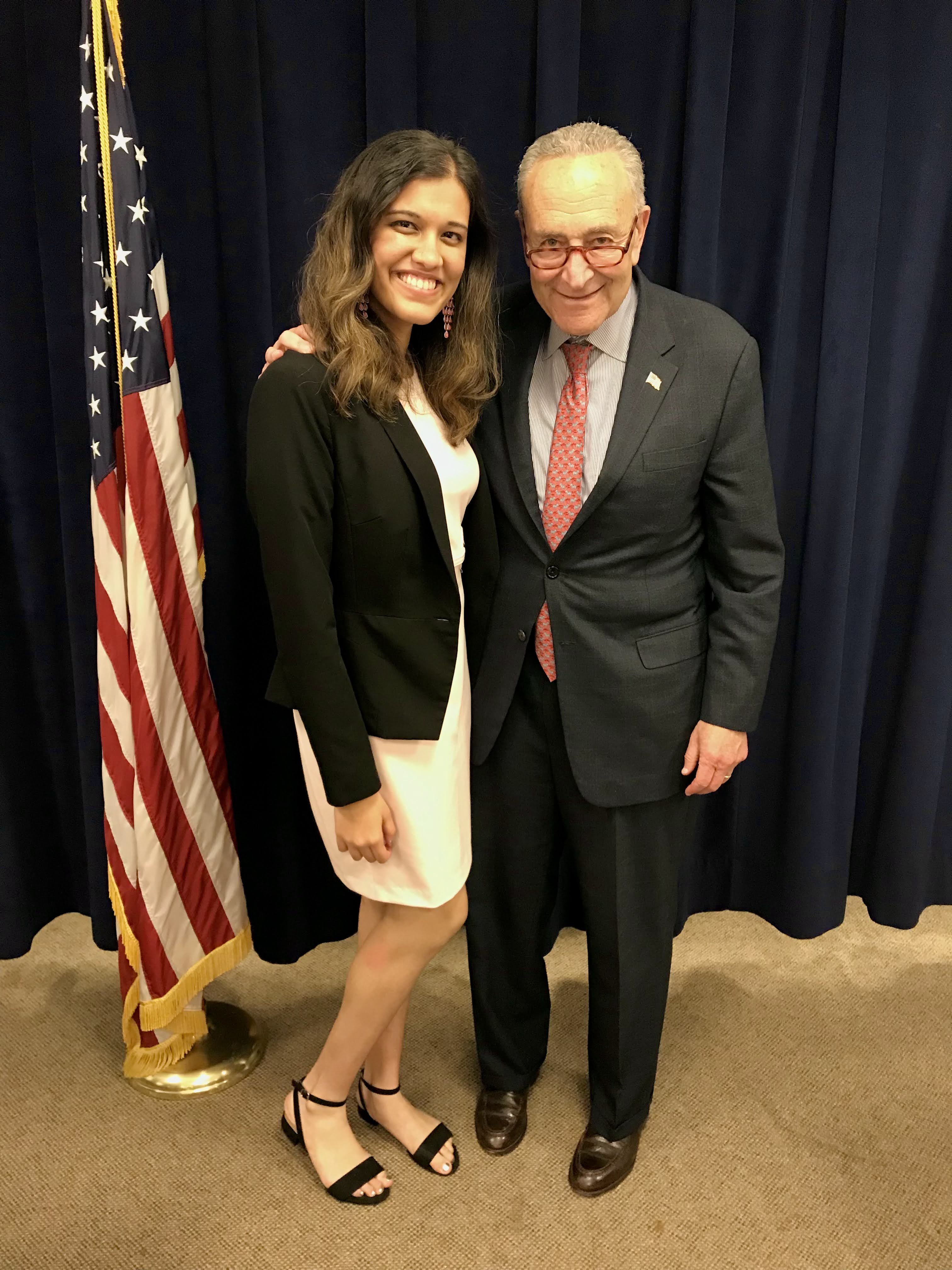 Laalitya Acharya with US Senator Chuck Schumer of New York

“The United Nations defined their Sustainable Goals (SDG)s as due in 2030. We are less than 8 years away from this and I truly hope that we can continue our exponential growth in solving these global crises. I am doing my part to close the water gap and I aim to help the UN reach SDG #6 (which regards clean water access),” adds the changemaker, who was a Casework Intern for Senate Majority Leader Chuck Schumer in May where she worked with the constituents of New York to resolve any issues they were facing.

However, this journey came with its share of challenges, and COVID was especially a tough time. But Laalitya was able to see a silver lining in each of her difficulties. “A lot of what The Nereid Project did was dependent on in-person camps/summits. Overnight, this changed and we were forced to move to a virtual format instead. But this shift led us to engage with more people outside of my local area. We worked with students from across the world and helped them kickstart their scientific journeys. Today, in a post-pandemic world, we have decided to keep our online format and return to in-person events – thus allowing us to expand our reach,” the changemaker says.

A voracious reader, she loves to devour historical fiction and memoirs. “I also play the violin and run as I find both activities to be very soothing. It helps me to take care of my body and mind which is crucial in this line of work,” says the changemaker. 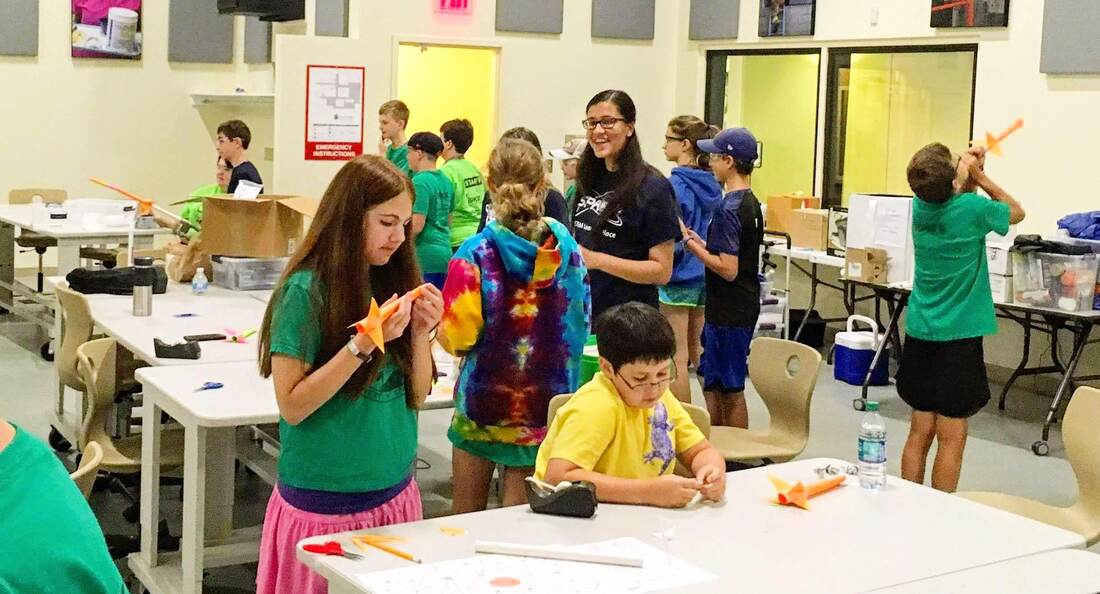 Laalitya Acharya encourages kids in the space of STEM

The last few years have been a learning curve for Laalitya as she extends some pieces of advice to youngsters looking to make an impact. “It’s okay to be a one-person-show,” she suggests, adding, “It can be super scary to put yourself out there as an ‘organisation’ when it’s just you wearing 5 different hats at the same time. But in reality, we all start small, and even the smallest changes can cause a ripple effect.” However, she emphasises the importance of finding one’s niche. “Go narrow and deep. Delve into a few sectors that you are particularly fond of and then you can expand as you grow,” adds Laalitya, who believes in building a network and finding a community – in terms of family, mentors, friends, advocates, and or organisations. But her biggest learning was understanding that the way to a ‘yes’ is through many ‘no’. “You will face negative comments, criticism, and other not-so-fun conversations on your journey. But the best way to think about it is that every ‘no’ gets you closer to a ‘yes’,” signs off Laalitya.