(November 19, 2022) In 2018, then 13-year-old Adarsh Ambati’s life came temporarily to a standstill when his mum suffered a third-degree heart block. Adarsh recalls seeing her connected to wires that were meant to monitor health but didn’t allow her to move around. So, Adarsh Ambati, now the founder of the Green Initiatives Movement, decided to develop a portable, cost-effective device that could monitor vital signs without hampering mobility.
Nine months later, the prototype for the vital signs monitor was ready. By the time he won the prestigious Gloria Barron Prize in 2021, Adarsh had also devised the Community Sprinkler and started an Amphibian Biodiversity Protection Initiative. 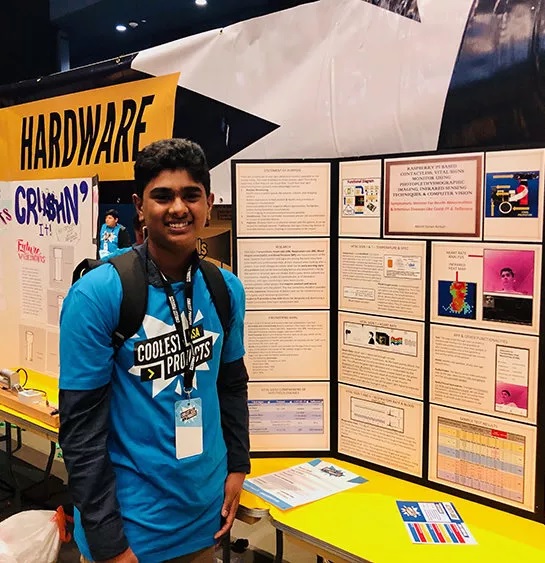 Now a freshman at Stanford University, Adarsh’s first project, the Contactless Monitor, was ready nine months after his mother’s illness. Fortunately, her mobility had been restored, so Adarsh ran over 1000 tests on his protype, as part of a 40-participant pilot study. “It took me around nine months to develop the device and build an app with notifications so doctors could use it, but also regular people,” he told The Guardian. “Because it’s contactless and relatively portable, it could even be used to detect infectious diseases like Covid-19.”
Even as a teenager, the young Global Indian was especially perceptive of the world around him, alive to its problems and eager to find solutions, which he does using his deep interest in technology and coding. Growing up in California, he noticed his neighbours using automatic sprinklers, using vast amounts of precious water on landscaping.

“While going to school in the rain one day, I saw one of my  neighbours with their sprinklers on, creating run-offs,” he told Vintage Billboard. “Through research, I found that 25 percent of the water used in an average American household is wasted each day due to overwatering and inefficient watering methods.”
In 2016, Adarsh began work on a prototype for a smart, low-cost, community sprinkler alert system. When he conducted a two-month pilot with 10 neighbouring homes, he found they had the potential to save some 50,000 gallons of water in a couple of months. “The sprinkler system is compliant with water regulations, to cost-effectively save water for entire neighbourhoods using a Raspberry Pi, moisture sensors, PyOWM (weather database) and by utilising free social media networks like Twitter,” he added.
The idea was to save the excess water that is wasted during general-purpose irrigation. The device can detect and integrate real-time weather forecast data to provide the optimum levels of water. It doesn’t stop there. The sprinkler alert system is also connected to social media and can publish information on when to turn on sprinklers and for how long.
The prototype cost about $50, which, incidentally, is less expensive than the higher-end smart sprinklers. By Adarsh’s estimate, it can be brought down to about five cents or less per household, since the device can serve an entire community.

Some 83 percent of water used in outdoor landscaping can be saved, a huge deal in Northern California, 100 gallons of water is used for outdoor landscaping everyday, in an average household. The sprinkler alert system was also presented to the San Jose City Council, who even considered installing the system in their public grass areas.

Nabeela Syed: The Indian politician making history at US midterms