Global Indianstory With three books and five honours, nine-year-old Abhijita Gupta is one of the youngest authors of India

With three books and five honours, nine-year-old Abhijita Gupta is one of the youngest authors of India

(July 30, 2022) Little Abhijita was thrilled to receive an invitation last year from the Ministry of Culture on behalf of the Government of India to be one of the 40 youth icons in the theme song honouring Azadi ka Amrit Mahotsav – 75 years of India’s Independence. The junior high school student and author of three books became a part of the ‘Mauka Hai’ song released by T Series right before Independence Day 2021, along with other notable young Indians including Neeraj Chopra, Sonam Wangchu, and P V Sindhu. 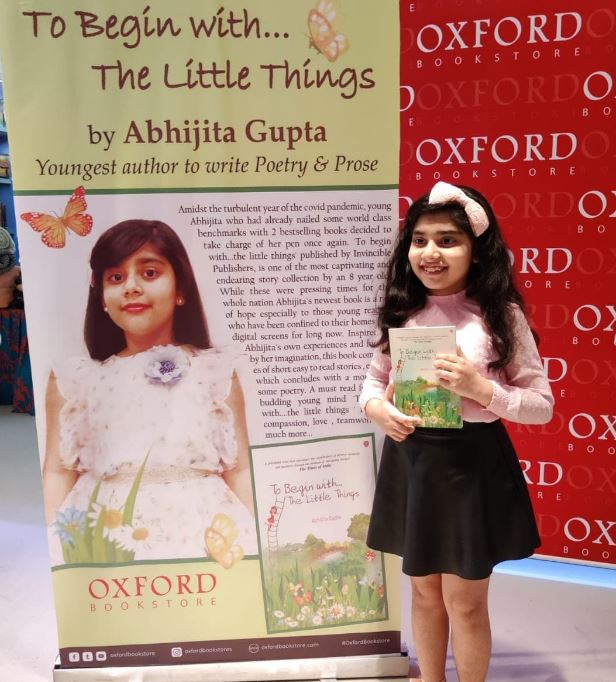 Abhijita during her book launch at Oxford bookstore

The Ghaziabad-based novelist, who got huge recognition as soon as she published her first book at seven, tells Global Indian, “I started writing when I was just five. An Elephant’s Advice, the first story I ever wrote, was about raising awareness to eat healthy food. My family appreciated it a lot.” Encouraged by appreciation, she went on to write more such stories which later got compiled into her first book.

“Several publishers turned my manuscript down after learning about my age, questioning how a seven-year-old could write a book. Invincible Publishers finally agreed. They were reluctant too in the beginning but when my mother persuaded them to read the manuscript once, they said, ‘Wow!” reminisces the youngster with a smile.

Impressed with the little wordsmith’s calibre, they agreed to a four-book agreement. Her non-fiction works, Happiness All Around, We Will Surely Sustain, and To Begin with the Little Things, combine stories and poems to encourage readers to live better lives. 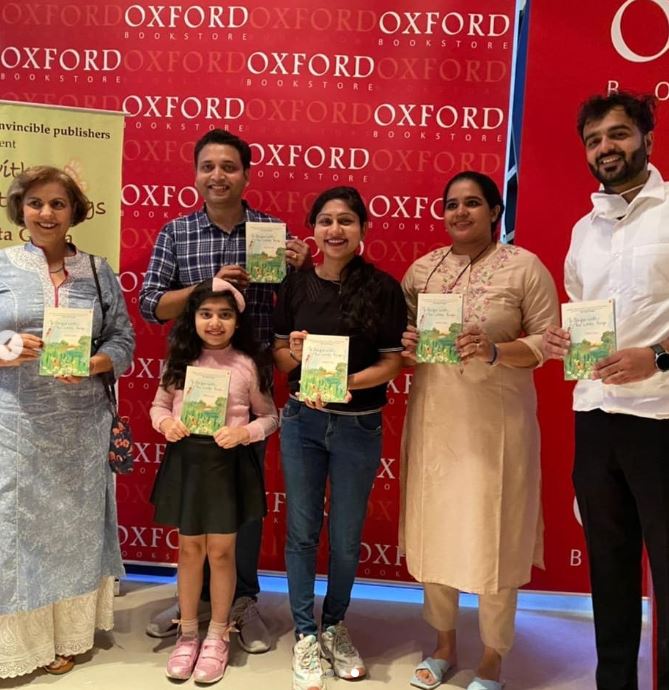 The publishing house claims on the book’s cover that “the writings have been left untouched so that the innocence does not get diluted” and adds that the title, cover design, and illustration ideas were all contributed by the young author.

Right after her first book released, the pandemic started. Abhijita made it a setting for her second book. She based the novella on her experiences during the lockdown, with characters that included herself, her parents, every member of her extended family, and the housemaid.

Abhijita is the great grand-daughter of acclaimed poets, Rashtrakavi Shri Maithili Sharan Gupt and Santkavi Shri Siyaramsharan Gupt. The youngster who showed interest in the craft on her own instead of being pushed into writing, seems to beautifully carry the legacy forward. 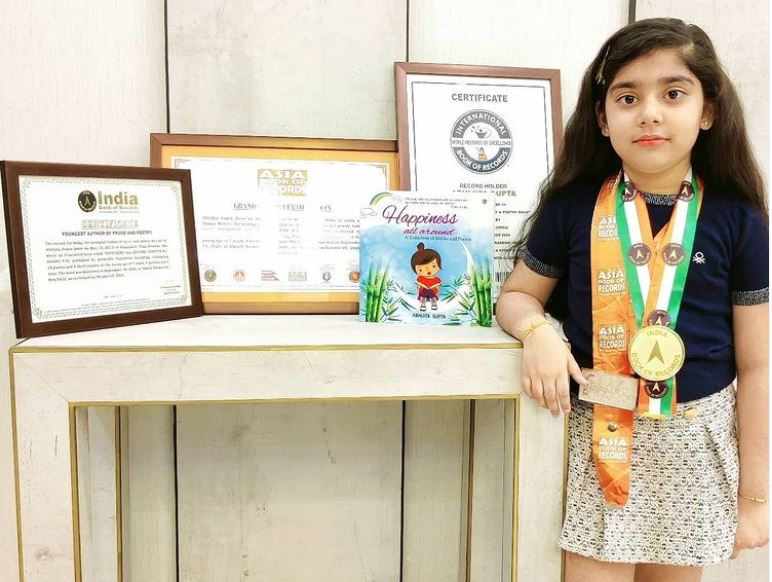 For her second book, she was recognised as the youngest author to create a non-fiction book on the Covid 19 pandemic, by both India Book of Records and the World Book of Records UK.

“I am going to write many books in the future. When something is your hobby, you cannot stop doing it. So, I would carry on even when I become a doctor and have less time,” says the Ruskin Bond fan who aspires to be a good human being first and then a doctor.

Her determination to become a doctor is unwavering. “My dreams do not change rapidly because I am stuck to them,” says the youngster firmly. “When I was small, I used to think whether I should be a firefighter, scientist, doctor, or writer. But now I am stuck to one goal”. The standard four student at Presidium School has already begun reading fundamental biology books and watching videos about it, even though biology wouldn’t be covered in her course curriculum for another two years.

The little author is so drawn to her craft that if she has the urge to write, she can find the focus anywhere. She maintains two diaries, one in which she writes poems whenever an idea comes to her mind and one in which she writes stories. “Poetry has some restrictions like choosing a rhyming word. I am not able to express my feelings wholeheartedly. There is something still left, I feel and that is why I love writing stories more,” says Abhijita, who received the Global Prodigy Award 2021 along with 99 kids from across the world in Dubai.

Coping with homework, school, playtime, and writing is not difficult for this young novelist. “I find time easily as it is my passion. I’ve gotten used to it,” says the prodigy, who never shows her work to adults till it is perfect. Her books have been giving beautiful messages to children her age ending with some or the other lesson or moral.

From Midnapore to Cambridge: Bal Puraskar winner Souhardya De is bringing Indic heritage to the world

Youngest author to land a book deal, Schwarzman Scholar Manthan Shah is a fountain of ideas