(July 21, 2021; 5.30 pm) Back in 2016, Tokyo’s Edogawa ward was contemplating the creation of a Singapore-like Little India in Nishikasai, an area that boasts a sizeable Indian population. A banker, Yogendra Puranik was the only Indian from a professional background at the meeting; everybody else was a restaurant owner. The imbalance wasn’t lost on Puranik, who also found that the Little India model was not socially healthy or sustainable since it didn’t factor in the community’s daily needs.

Puranik strongly felt that public opinion should also be factored in since the plan involved an Indian street with at least 50 to 60 establishments spanning restaurants, groceries, and clothing along with a temple, and hospital. He told Japan Times that he didn’t think the plan was financially viable and had plenty of other ideas to put forth; but they were met with resistance. “My suggestions to the city councilor turned into an argumentative debate,” which spiraled out of control – the councilor threatened to have Puranik thrown out of Nishikasai.

That was a turning point for him and he decided to join politics himself. Three years later, Puranik, who is popularly known as Yogi, was a councilor; the first person of Indian origin to be elected to office in Japan. “I wanted to join the other side of the table so I could take the opinion of the foreign community to the city administration.” A naturalized Japanese citizen, Puranik announced his candidacy in the regional elections that were to be held in April 2019. The Indian-origin politician and member of the Constitutional Democratic Party won by a huge margin. 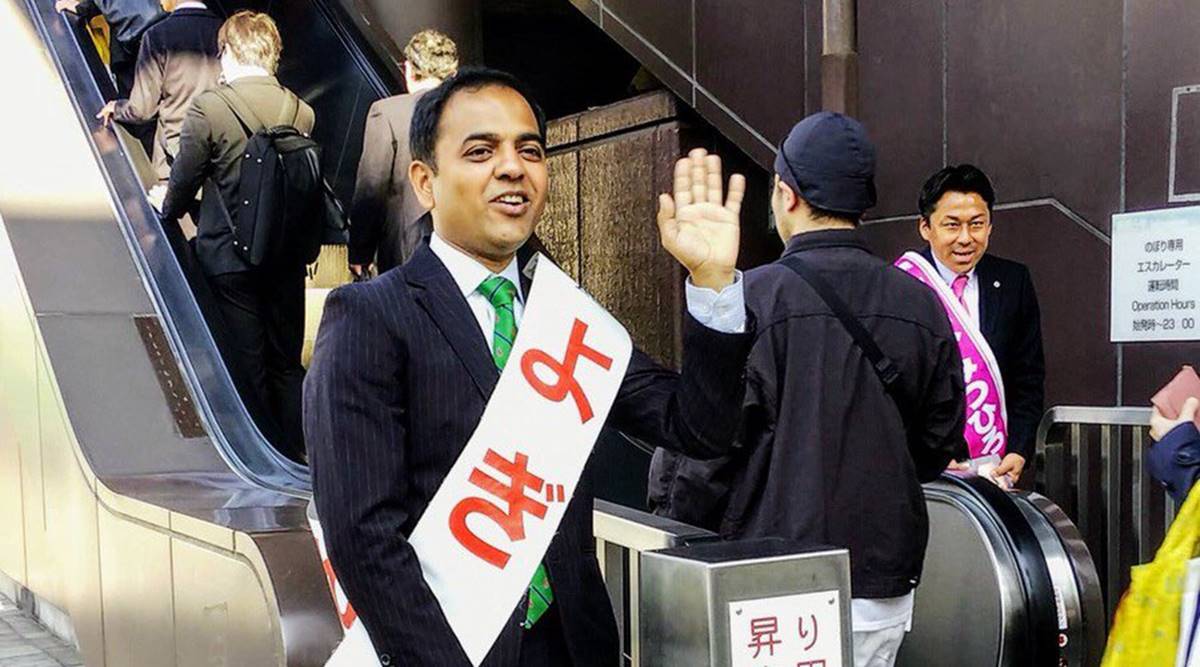 Yogendra Puranik after he was elected as councilor

From Ambarnath to Tokyo

Born in 1977 in Ambarnath in Mumbai to Rekha, a teacher, and Sharad, a machinist in the Ordnance Factory, Yogendra Puranik studied at the Kendriya Vidyalaya School. When the family relocated to Pune, he transferred to the school’s Pune branch. He graduated from Sir Parashurambhau College in Science and also studied languages like Japanese and German from the Foreign Languages Department of Pune University. In 1997 he was awarded the Study Tour award, a scholarship from The Japan Foundation and that is when his interest in Japan began to develop. He then pursued a Business Management program from IIM-Calcutta with a focus on strategies for doing global business.

Yogendra Puranik with his mother Rekha and son Chinmay

While he began his career in 1996 with a small-scale IT firm called Sutra Systems, he moved to Japan in 2001 where he worked with companies such as Infosys, Fujifilm and Polaris before switching to the banking sector in 2010 as vice president of operations strategy at Mizohu Bank. His last position was at Rakuten Bank as vice director of corporate planning before he took the plunge into politics.

In summer 2001 he married his Chinese girlfriend and they had a son together, Chinmay. However, the couple divorced shortly thereafter and ever since Puranik has raised his son as a single parent with help from his mother, who now runs an Indian restaurant in Kasai.

Puranik moved to the Nishikasai area in 2005 for the sake of his son’s cultural education and because he needed support from the Indian community as a single parent. He eventually became involved with both the Indian and Japanese communities through cultural festivals and voluntary activities. As a result, he became a sort of liaison between his Indian and Japanese neighbors.

When the earthquake struck Tokyo and devastated northern Japan in 2011, Puranik and other volunteers stepped in to help neighbors and victims of the disaster. “We also started a helpline for Indian people and I shared my personal phone number,” he told Japan Times. Within a few days he had answered over 200 calls about radiation, food and water safety. His work here cemented his standing as a social volunteer.

It was shortly after this that he decided to settle down in Japan and got citizenship. Puranik also runs the Edogawa India Culture Center, which hosts free classes on yoga, languages, cooking, art, and music.

Three years after the Little India incident, Puranik is a councilor; the first person of Indian origin to be elected to office in Japan.

“I want to be an assemblyman who can connect everyone regardless of nationality, age, or even disabilities, through my 20 years of living in Japan.”

Thank you for writing about me. Very nicely and concisely written. One change. I moved to Nishi Kasai in 2006 and I moved here for safety of my son. In fact I was worried about the negative image of Indians as a clusture as rule breakers. And I also organized diwali function in Nishi Kasai as a part of organizing team since 2006 to 2010.