Global IndianstoryNageshwar Reddy: The Germany-educated doctor behind one of Asia’s finest gastroenterology institutes

Nageshwar Reddy: The Germany-educated doctor behind one of Asia’s finest gastroenterology institutes

As a child, he gave his parents nightmares with his mischief and penchant for scientific experiments. However, today he is one of the most respected doctors in the country and the man behind the prestigious Asian Institute of Gastroenterology (AIG),  The Indian government honored him with the Padma Bhushan in 2016, and more recently, Dr D Nageshwar Reddy became the first Indian to receive the Rudolf V Schindler Award, the highest honor from the American Society of Gastrointestinal Endoscopy (ASGE).

Over the years, Dr Reddy’s hard work, determination, and vision have paid off and today AIG (founded in 1994) provides affordable medical care to millions of people across the world. The hospital is one of the largest referral centers in Asia for therapeutic endoscopy.

In an exclusive interview with Global Indian ahead of National Doctors Day, Dr Reddy, a visiting professor at Harvard Medical School, says,

“We wanted a low cost, high-value business model that would cater to all segments of the population. With AIG, we have been extremely successful in doing so in the last 15 years.” 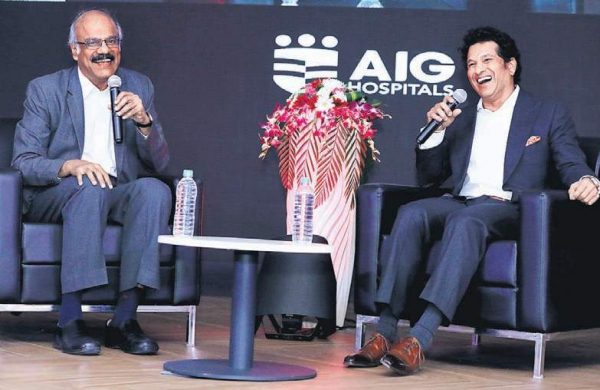 Dr Reddy has a strong sense of giving back to society. He had invented a gastric stent 15 years ago, called the Nagi stent. He gave the manufacturing rights to a Korean company on the condition that it should be affordably priced. Nagi is the largest selling stent in the world today

Dr Reddy’s journey has been fascinating: The eldest of four siblings was always a troublemaker as a child. His curiosity led him to try his hand at various experiments; some with disastrous results.

One time, he wanted to see how petrol burned, leading to him accidentally burning down their garage. Another time, he innocently put his one-year-old brother inside the refrigerator to “protect him from the harsh summer heat”.

Needless to say, his parents were worried and sent him to a boarding school at the age of seven. That became a turning point in his life. His focus shifted to academics and he decided to become a doctor like his father D Bhaskara Reddy who was a well-known pathologist.

Coming from a family of medical professionals, meant Dr Reddy found inspiration within his family. He has two brothers, who are successful bankers and engineers. “The brightest of us all is our sister who did MSc Chemistry,” he smiles. His wife Dr Carol Ann Reddy, a dermatologist, and daughter Sanjana are his greatest strengths.

“The one Indian-ness that has remained with me throughout is being family-centric,” he says.

After school, he went on to study medicine at Kurnool Medical College, but it was during his MD at Madras Medical College that a young Nageshwar Reddy got interested in the field of gastroenterology and liver diseases. Thereafter, he went to Germany to receive specialized training in gastroenterology at the University Medical Center Hamburg- Eppendorf. Upon his return, he first joined the Nizam’s Institute of Medical Sciences (NIMS) and later the state government services in 1984.

“I decided to quit the government service and start a gastroenterology hospital to cater to this large mass of patients.” Dr Reddy has previously received several recognitions including the Master Endoscopist award in 2009, ASGE International Leadership award in 2011, and Fellow of American College of Gastroenterology in 2012. He has published over 495 papers in national and international peer review journals.

Captain of the ship 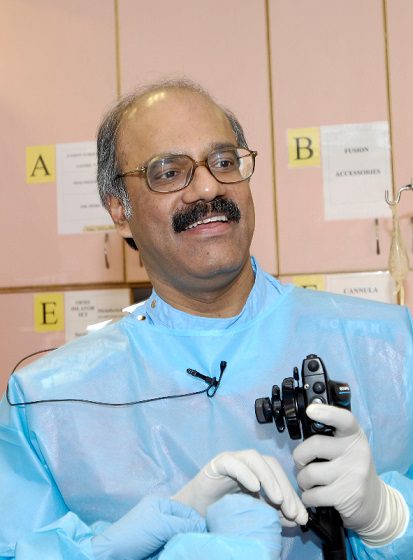 “The creation of an institute of the magnitude of AIG Hospitals with its capabilities not only of patient care but training many junior doctors and doing cutting-edge research in the medical field is the one thing that gives me maximum joy when I look back at my journey,” says Dr Reddy. Today, the hospital’s research wing has tied up with the Center for Cellular and Molecular Biology (CCMB), North Western University of Chicago, and the University of Texas Medical branch for Genetic Research.

“This journey has helped me develop patience and has encouraged me to be more forgiving,” he says. Staying focused an/d following one’s passion is important for those who are just starting off on their own journeys says the doctor who considers himself a Global Indian. His favorite Global Indian though is Fareed Zakaria the Indian-American journalist and political commentator.

As someone who likes to read books on philosophy, Dr Reddy says that the one thing that helped him ride the tide was the book Sapiens: A Brief History of Humankind, by Yuval Noah Harari.

Dr Reddy, who received the Rudolf V Schindler Award last month for pioneering medical work in the field of gastroenterology, has faced his fair share of hurdles in his journey. “But if one has the will, one can overcome any obstacle,” he says, adding that AIG, the biggest gastroenterology hospital in the world, was started with support from many friends and liberal donations. But how does he manage to work 18 hours a day?

“If you enjoy your work, it does not feel like a burden and you will not be tired.”

my large bowl disease treatment in cmc not curesness