From being a soft-spoken girl, who used to marvel at the chemicals and their reactions in her father’s laboratory, to a trailblazer in dental nanomaterials, Sumita Mitra’s rise to fame has been nothing short of phenomenal. This Indian-American chemist loves to develop new technologies and then transform them into products to improve lives. She recently received the prestigious European Inventor Award 2021 for her work in integrating nanomaterials in dental fillings. Presented by the European Patent Office (EPO) annually, the award recognizes the contribution of outstanding inventors from Europe and beyond who have made an exceptional contribution to society, technological progress, and economic growth. The winners were selected by an independent international jury.

In an exclusive chat with Global Indian, Mitra recalls the journey that helped shaped her.

“Though it is our experiences that shape us, it is our roots that anchor us. I’m an Indian at heart and my roots have been in Kolkata, where I grew up,” she says. Mitra pursued her MSc in Chemistry from the University of Kolkata. She then moved to the US for her Ph.D. in Organic Polymer Chemistry from the University of Michigan following which she joined 3M’s Corporate Research Labs in 1978. 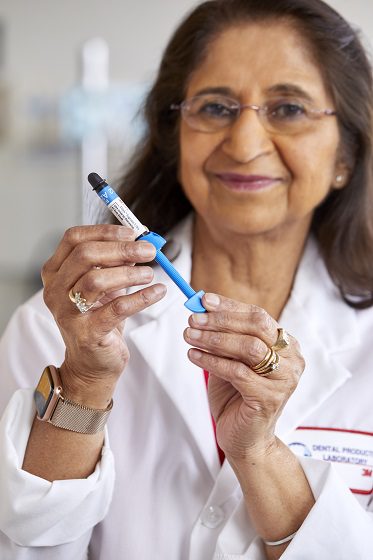 By 1983 she began working in the dental products department, which is now called 3M Oral Care Systems. It was during this time, that she became aware of the limitations of the materials being used in dental fillings at the time — they were either too weak to be used on biting surfaces, or lost their polish very soon. Nanotechnology was emerging as a field of research and Mitra decided to explore how it could be integrated with dentistry; she wanted to use her expertise in polymer chemistry to develop inventions to solve real-life problems.

By 1998 she was promoted as Corporate Scientist, the highest technical position at 3M; Mitra also served as the Industrial Director of Minnesota Dental Research Centre for Biomaterials and Biomechanics (MDRCBB). After she retired in 2010, she and her husband, Smarajit, set up Mitra Chemical Consultancy.

In 2009 she was named an American Chemical Society Hero of Chemistry and was inducted into the US National Inventors Hall of Fame in 2018. In 2021 she was elected to the National Academy of Engineering for her work related to inventions in nanotechnology for use in dental materials.

According to Mitra, her time studying in the US taught her how to think differently and stay persistent. One of the most important takeaways for her was to not be constrained in her thinking and be unafraid to pursue her dreams. This translated into her work at 3M’s dental department as well where there was immense scope to develop new products using science and new materials. “Back then, the dental products business was smaller and had immense potential for growth. We worked on transforming ideas into reality,” she adds, attributing her success to teamwork.

Her work also allowed her to periodically visit India where she got to interact and closely work with professors, industry experts, and students from dental colleges.

Her innovative idea to integrate nanoparticles with dental materials and produce fillings that are more aesthetic, durable, and strong has been successfully commercialized in more than one billion tooth restorations.

“Being the reason behind their smiles, makes me smile. I feel gratitude, as I always say, one can have an initial idea but it takes a lot to convert that into reality,” she says.

Mitra’s love for the subject began when she was 8 and living in Arunachal Pradesh. Given the lack of proper schools in the state, it was her mother who began home-schooling her and laying her educational foundation. Her father, a chemist, worked at a wood factory and Mitra would often visit his office. “I loved to see how he would work with different materials and transform them into something new. It was fascinating,” she says. Her mother, she adds, encouraged her to pursue her dreams without being constrained by cultural boundaries.

Her love for Organic Chemistry stems from the fact that it is precise.

“I marvel at the preciseness of the science, how such small entities can be rearranged to create something new, what unknown hand has created this… Chemistry experiments in a laboratory may go wrong, but those in nature rarely do,” she smiles.

Recalling the contributions of her husband, who is also a scientist, Mitra calls him her favorite Global Indian.

Currently, Mitra dedicates her time to promoting STEM education and volunteers as a teacher at schools, colleges, and universities, alongside working as a chemical consultant. She further stresses on the need to encourage more youngsters to take up science (integrating them with other areas of study), as there is an absolute need to solve the world’s problems, including the ongoing pandemic.