As a young girl, economist Gita Gopinath’s father would neatly line up vegetables on the family table to help her understand the concept of multiplication. Perhaps that explains her love for numbers. As she grew older Gita was big on athletics; but one day she surprised her family when she decided to quit sports. Her reasoning: she needed to focus on her studies so she could be somebody big one day. Today, the 49-year-old is the first female chief economist at the International Monetary Fund (IMF) and her journey from a middle-class Mysuru girl to an economist of great repute is a story of grit and determination. Economist Gita Gopinath is as well-known for her research on international finance and macroeconomics as she is for rocking her beloved jhumkas on the global stage.

This year, the former John Zwaanstra Professor of International Studies and of Economics at Harvard University, is one of the 34 immigrants in the 2021 Great Immigrants list by Carnegie Corporation of New York. From Kolkata to Mysuru to Boston

Born in a Kolkata-based Malayali family in 1971, economist Gita Gopinath spent part of her childhood in Hyderabad before her parents relocated to Mysore 41 years ago. She and her sister picked up fluent Kannadiga, but Malayalam came to her much later when she was appointed as Kerala Chief Minister Pinarayi Vijayan’s economic adviser in 2016. Talking about her decision to quit sports while in school, her father TV Gopinath told The Week,

“One day, she told me that she did not want to go for practice. ‘Sports is a tricky affair. Unless you are number one in India, you are a nobody! But if you come first or second in university, you could be somebody big’, was her reasoning.”

Ok, I don't think I will ever get over this. As a HUGE fan of Big B @SrBachchan, the Greatest of All Time, this is special! pic.twitter.com/bXAeijceHE

The economist graduated in Economics from Lady Shri Ram College (LSR) in Delhi where she bagged the gold medal; it was the first time a LSR student had bagged a gold which traditionally went to St Stephen’s. She went on to join Delhi School of Economics for her post-graduation and it was here that she met her now husband Iqbal Singh Dhaliwal, a former IAS officer and presently global executive director at Massachusetts Institute of Technology’s J-PAL, a poverty research centre.

Economist Gita Gopinath went on to join the University of Washington, Seattle for a five-year PhD program. A few months in, her professor felt she deserved to study at a better school and recommended her to Harvard and Princeton. Gita eventually completed her PhD from Princeton University and wanted to return to India to join her husband. But Princeton offered Dhaliwal a scholarship in public affairs so he could join her in the US instead. The couple is now based out of Boston where they live with their 17-year-old son Rohil. 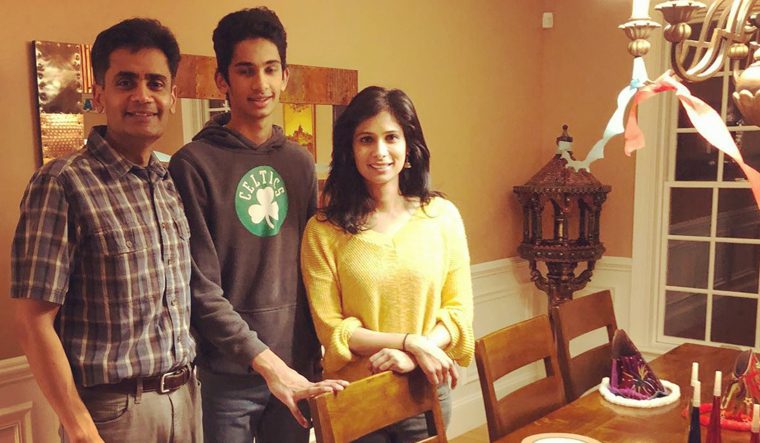 Gita Gopinath with her husband Iqbal and son Rohil

Connected to her roots

Despite her hectic schedule, Gita Gopinath economist is strongly connected to her roots. Evening phone calls to her mother and regular contact with her friends and relatives back home are part of her routine. Her father says that she loves simple food – even her Spanish chef has learnt to make chapati, rice and curry.

In fact, when the 46-year-old got a call from IMF chief Christine Lagarde in 2018 informing her about the IMF appointment, she was at an aunt’s house in Bengaluru enjoying a family get-together. When she told her mother about the new job, the latter didn’t know what the IMF was. “She’s always putting me in my place,” Gita told Vogue in an interview, adding that her mother keeps her grounded.

“Even as kids, she made us realize our privilege, that we had access to education, good healthcare and loving parents who took care of us. The reason I push myself and work hard is because I have had a lucky hand, and I don’t want to waste it. If I can give back to society and if I can be of value to society, I want to be that person.” 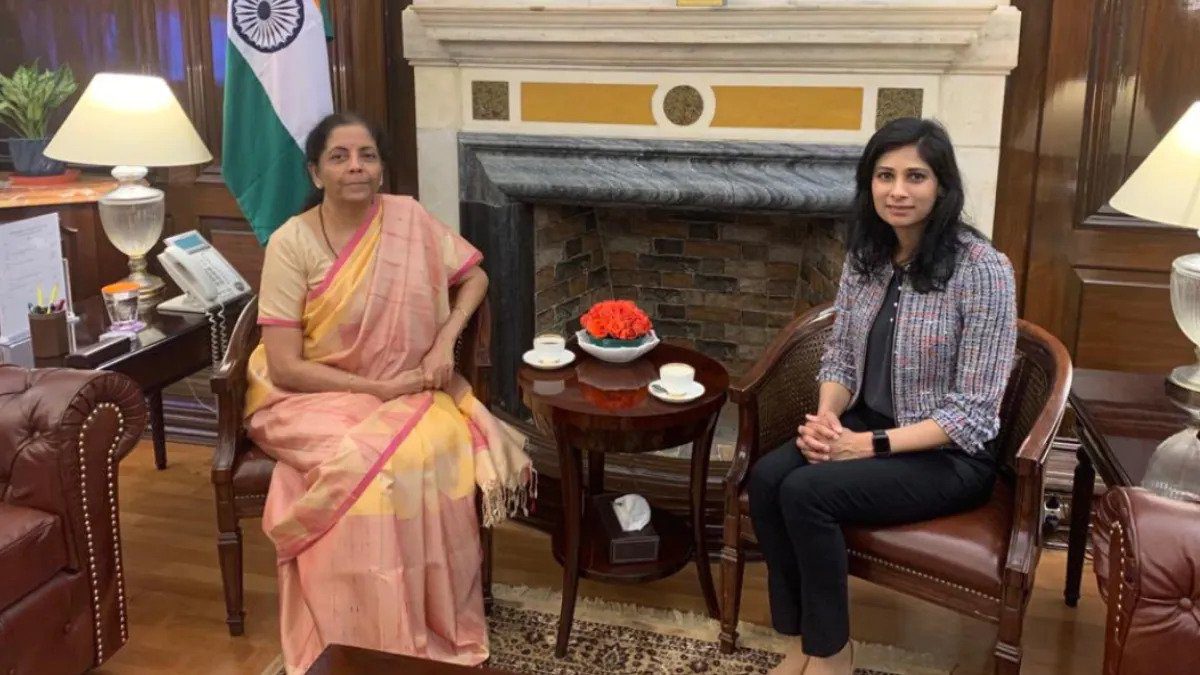 Her role at IMF encompasses everything from helping determine financial assistance to countries to leading research. Her appointment came at a time when most countries are seeing a move away from globalization and grappling with economic uncertainty. With COVID-19 ravaging the world, the pandemic’s economic crisis has exposed bleeding economies and the IMF has had its task cut out. Gita has been putting together economic projections, policy recommendations and analyzing global economy. As she spoke with pandemic experts last year, she realized that the crisis this time round was far worse than the Global Financial Crises.

Gita is considered a feminist icon by many; she is the first Indian-origin woman to be granted tenure at Harvard’s renowned economics department, and she is the first female chief economist at the IMF too.

“It’s hugely important to have women in positions of leadership. Not just for economies (in terms of GDP growth rates) but to bring a diversity of thought to policy issues,” she says.

Watch Gita Gopinath talk on how countries can grow sustainably