(August 30, 2022) Toxic relationships are not very uncommon these days. As a 25-year-old, Priyal has seen many of her peers in such relationships for years, ultimately seeking professional help and support to come out of it. What finally triggered her to launch StandWeSpeak, her SexEd tech platform, was the incidence of abortion of a young acquaintance who was also mentally and physically abused in her relationship. It has been just nine months into the venture and Priyal’s startup has taken her places. From being invited to promote social and gender equality at the World Bank Group Youth Summit 2022 to being approached by UNDP to share her journey, her initiative has garnered attention at the right places. The Diana awardee is now stationed in South Korea for a three-and-a-half months’ accelerator program.

StandWeSpeak has been selected as top 60 in the K-Startup Grand Challenge, a global accelerator startup programme by the Government of South Korea as part of solution for the country’s problems. 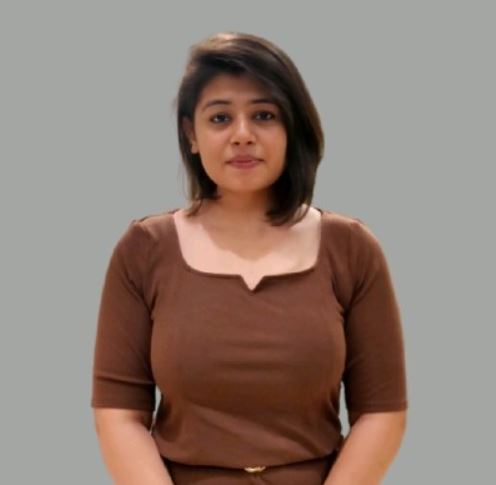 Priyal appears excited about the opportunity as she connects from Seoul. “It’s not just a great opportunity but huge validation of my efforts that the government of South Korea is supporting and helping to establish my company here,” Priyal tells Global Indian. “This motivates me to do better as we got chosen amongst thousands of applications received globally,” she says.

“As a society, we are not allowed to discuss relationships openly and that is why it takes longer for people to end abusive relationships,” says Priyal. Her initiative equips people with life-skills required to take care of their well-being, relationships, mental and sexual health. It empowers youngsters to make informed decisions. “It’s a 21st century sexual health ecosystem for millennials and Gen Z,” she tells.

“I did not register my organisation as an NGO because when something is provided for free, people do not value it enough. I did not want that to happen to my initiative,” says the entrepreneur, who works from Goa. In the course of nine months, StandWeSpeak has handled 15,000 chatbot interactions and has conducted workshops of 10,000 youngsters in schools and colleges. 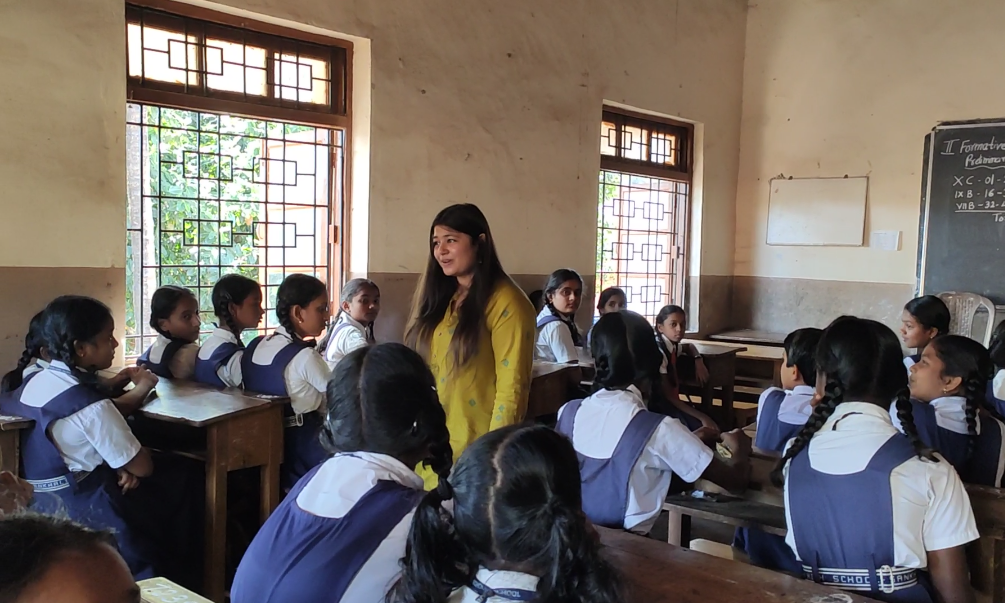 Priyal Agrawal in a school workshop

“Youngsters are able to find anything and everything about love, gender, intimacy, relationships, sexuality, consent, and much more,” says Priyal, who enjoyed short stints as psychological first aid provider in Tihar jail, Delhi and as a counsellor at Samaritans, a suicide prevention helpline in Goa before starting her venture.

Hiccups along the way…

The psychology graduate from Mumbai’s Sapphire College is the first entrepreneur in her family and it took quite a bit of convincing. By then, she had tried a number of things, from preparing for IIT and trying her hand at architecture for a year before ultimately studying Psychology.

“As a young woman in India, starting a venture is not easy. People do not accept the idea readily. It is considered a passion or side project until the time the girl gets married,” says Priyal. “People advised me to go for a masters first or think of something else as I didn’t have experience or expertise of running a company.”

Also, the domain that she chose to work does not get recognised as important or considered in a need of a solution. “India is conservative of talking about sexual health, wellness and providing sexual education to youngsters,” she rues. However, to be recognised at global platforms has added immense strength to her confidence in her choice of venture.

“The need exists and young people are looking for solutions,” says Priyal. She was confident about it looking at the youngsters around. Starting with a bootstrap budget, she learned to design the initial version of the platform. Later, when her team expanded, it interspersed AI with counselling of the gender inclusive platform that is being used even by members of the LGBTQ community. 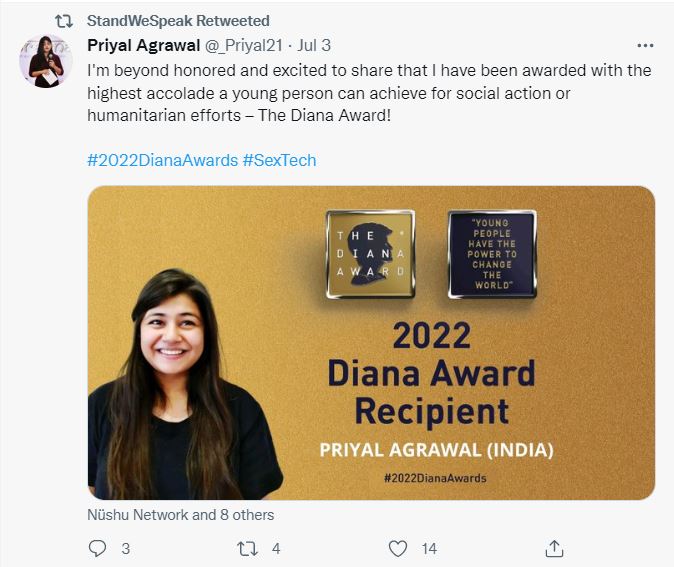 Apart from the expansion plans in South Korea, Priyal is planning to make StandWeSpeak more inclusive so that even people with physical disabilities can access the services through features like voice search option. She is looking at producing informative videos which would also have the sign language component so that it can reach a wider audience. Having multilingual services in India is also one of her plans. Priyal wants to promote her services worldwide someday but for now, is taking things one step at a time.

From quantum biology to being a voice for child rights, social entrepreneur Mannat Choudhary does it all