Global IndianstoryMilkha Singh: The man who ran to survive and succeed

Milkha Singh: The man who ran to survive and succeed

On Friday, India’s Flying Sikh breathed his last after a prolonged battle with COVID-19. The 91-year-old Milkha Singh, who’d maintained an active lifestyle right till the end, was diagnosed with Covid in May and was under home quarantine. A week later though, things took a turn for the worse and he was admitted to Mohali’s Fortis Hospital. Though he managed to beat Covid, its complications took a toll on the sports icon and he died five days after his wife of 58 years Nirmal breathed her last. 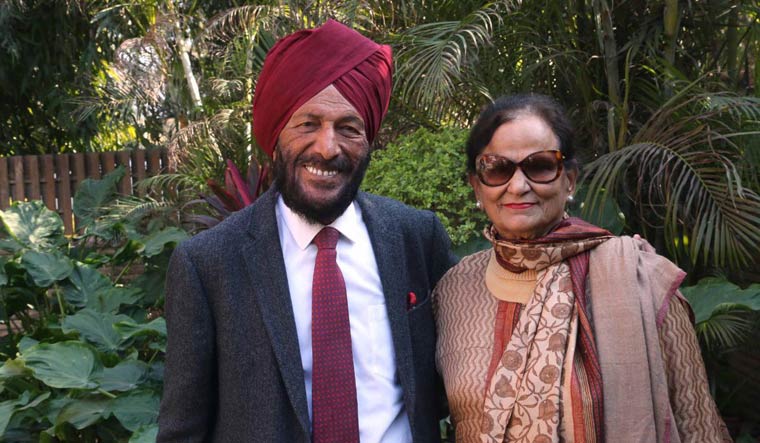 Milkha Singh and his wife Nirmal

In a tribute he posted on Instagram, Milkha Singh’s son and ace golfer, Jeev Milkha Singh, said, “You have touched so many lives over the years and the impact you have made on this nation will long be remembered. Being around you has taught me how to be a better father, brother, husband and has made me into a more compassionate and empathetic human being.”

Singh had won four Asian gold medals and finished fourth in the 400m final at the 1960 Rome Olympics. In fact, running was an integral part of the sports star’s life. In an interview with the BBC he had once said that he would run for as long as six hours a day. “I would push myself so much that in the end I would collapse and I would have to be admitted to the hospital, I would pray to God to save me, promise that I would be more careful in future. And then I would do it all over again,” he said.

Race for his life

Incidentally, Milkha’s tryst with running began during India’s partition when he had to flee to save his life. Born in Pakistan’s Layalpur, he had watched his parents and siblings being slaughtered; as his father breathed his last, he said, “Bhaag Milkha Bhaag,” urging him to run to save his life. And run he did, till he got onto a train bound for Delhi. Here he roamed disenchanted and resorted to petty crime before working in a small roadside eatery. At one point of time, he was sent to Tihar Jail for traveling ticketless in a train. His sister, Ishar, had to pawn her jewelry to secure his bail.

The tide turned in 1951 when he got recruited into the Indian Army in his fourth attempt. He ran a cross– country race of five miles (his first race) when army coach Gurdev Singh promised an extra glass of milk to those who finished in the top 10. Singh finished sixth and was selected for special training in the 400m category. There was no turning back since then and he went on to become India’s first sporting superstar.

Singh won Gold at the 1958 Commonwealth Games in Cardiff, becoming the first Indian athlete to do so. His win was a watershed moment in Indian sporting history, which led then Prime Minister Jawaharlal Nehru to declare a national holiday. In 1960, he finished fourth in the 400m Rome Olympics, missing the podium by a narrow 0.01 seconds. In an interview with India Today a couple of years ago he said,

The Flying Sikh’s record in track and field stayed intact for 52 years till Krishna Poonia won the women’s discus throw in the 2010 Commonwealth Games.

In 1960, Singh was invited to participate in the 200m race at the International Athletic competition in Lahore, Pakistan. The athlete was reluctant to go; he hadn’t been back in Pakistan since the partition. He did go eventually, and went on to win the race, while Pakistan’s Abdul Khaliq took the bronze. It was then that General Ayub Khan, Pakistan’s second president, bestowed upon him the title of “The Flying Sikh”, a moniker that stuck with him till the end.

He once took his sister to watch a race at the National Stadium; when the starter’s gun was fired, it startled her and she thought her brother had been shot. It was only after he finished the race and rushed to console her that she drew a breath of relief.

The essence of his life

Singh retired from athletics after the 1964 Olympics, two years after winning the gold at the Asian Games held at Jakarta. He was awarded the Padma Shri in 1959. Singh, who had been offered the Arjuna award (which had been instituted in 1961) in 2001, had famously turned it down, stating, “the honour was not of the stature of the services he rendered the nation.”

Singh believed in staying disciplined and fit. In fact, he would go for a jog even at the age of 91, qualities attributed to his time in the army where he was promoted from sepoy to junior commissioned offer after the 1958 Asian Games. He eventually rose to the rank of Honorary Captain. After hanging his boots, he went on to become the Director of Sports in Punjab Ministry of Education, a post he retired from in 1998.

All of Singh’s medals, along with the pair of shoes he’d worn in Rome, were donated to India and displayed at the Jawaharlal Nehru Stadium in Delhi before being moved to a sports museum in Patiala.

Singh and his daughter Sonia Sanwalka wrote his autobiography The Race of My Life, published in 2013. Singh, reportedly sold the rights to the film Bhaag Milkha Bhaag for only one rupee and inserted a clause stating that a share of the profits be given to the Milkha Singh Charitable Trust. The trust helps youngsters achieve their potential through education.

A scene from Bhaag Milkha Bhaag

The 2013 film starred Farhan Akhtar. Singh told BBC that he wanted it to inspire the next generation.

“We had nothing in our times. The athletes and sportsmen in those days didn’t earn much money. We worked for the applause, people’s appreciation inspired and motivated us, we ran for the country,” he said.

A legacy that inspired a whole nation to aim for excellence. To never give up and chase your dreams. Rest in Peace #MilkhaSingh ji 🙏. You will never be forgotten. pic.twitter.com/IXVmM86Hiv

Saddened over death of #MilkhaSingh in India. flying Sikh. He was from our area Kot Addu (Muzaffargarh). A son of soil. My condolences with his family. I had started taking exercise seriously after listening his pearls of wisdom. This 1.44 minutes clip can change your life too
👇 pic.twitter.com/35LEdOKIcG

The legend lives on… even if body has given way.
RIP #MilkhaSingh the legendary Indian. 🙏🏽 pic.twitter.com/SGcR29mVGY