As a child, Srinath Ravichandran was obsessed with all things space. Every time ISRO launched a rocket, the Chennai boy would be glued to his television set devouring all the footage Doordarshan would afford its viewers. Little did he know that one day he would co-build a startup that would fulfill all his space dreams. Today, Agnikul Cosmos is the world’s first company to successfully test a fully 3D printed rocket engine that can carry a payload of up to 100 kilos into lower earth orbit. 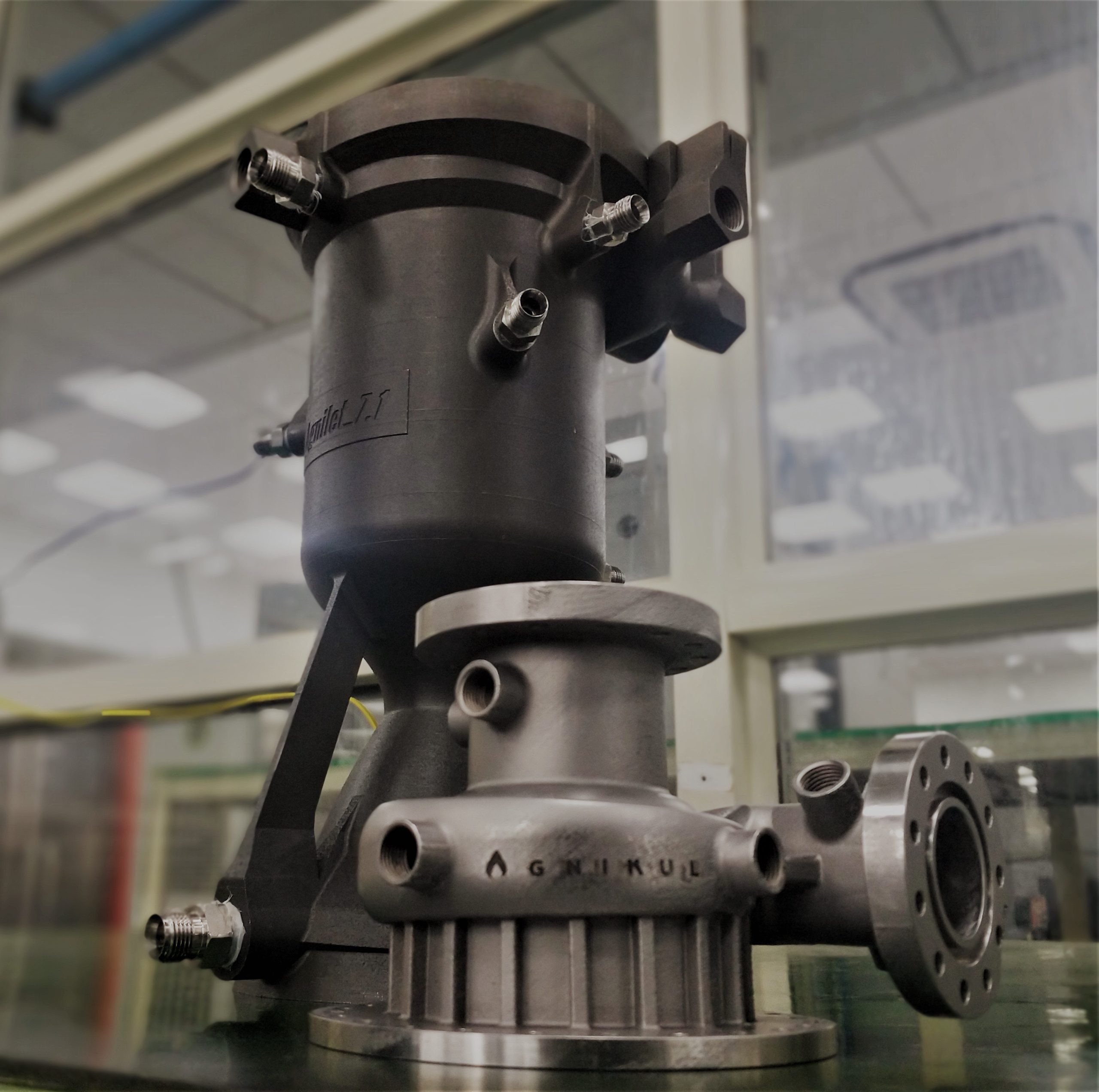 The 3D printed engine and pump by Agnikul Cosmos

Backed by the likes of Mayfield India, Anand Mahindra, Naval Ravikant, and Nithin Kamath, the IIT Madras-incubated startup has signed a pact with ISRO to receive tech support and is gearing up to launch its first rocket into lower earth orbit next year. “We had planned on a December 2021 launch, but things got pushed a little due to the pandemic,” 36-year-old Ravichandran told Global Indian. The company put on hold its liquid oxygen-based testing during the pandemic’s second wave when the country immediately needed medical oxygen for Covid-19 patients.

We are temporarily pausing all our liquid oxygen based testing until oxygen supplies stabilise across hospitals in our country. In the meantime, happy to help Covid patients in anyway we can. We are all in this together. #COVIDEmergency2021 #COVIDSecondWaveInIndia #OxygenShortage

From finding it incredibly hard to get investors to raising Series A funding of $11 million in May, Ravichandran and his co-founder Moin SPM have come a long way.

Despite his love for all things space, Ravichandran found himself pursuing an electrical engineering degree at College of Engineering, Guindy, following which he took up a regular 9-to-5 job in Bengaluru. Two years later, he flew to New York for a master’s in financial engineering from Columbia Engineering and landed a cushy job on Wall Street. However, it failed to retain Ravichandran’s interest; he found himself pursuing a film course to figure where his interests actually lay. “All of this helped me learn so much about myself. I realized that space tech was where my true happiness lay and I enrolled in an aerospace engineering master’s program at the University of Illinois Urbana-Champaign,” he says. 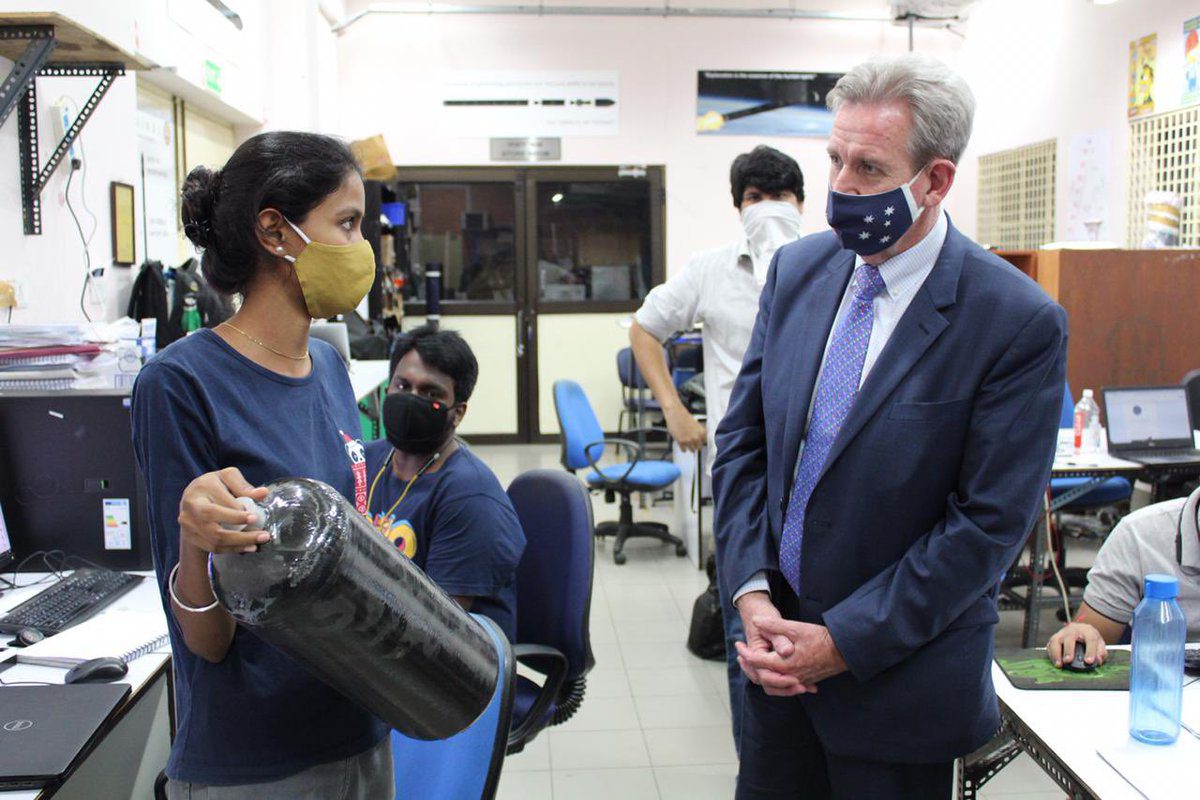 But he soon realized he was still cut off from the hub of all space tech action: Los Angeles. Ravichandran decided to convert his full-time program into an online one and moved lock, stock and barrel to Los Angeles, took up a job in finance again, and used all his free time to network with the space tech community. “I’d never been a very conversant person, but as I worked my way around the community, I learnt to better myself. It was during this time that I realized there was a problem here,” he says. “The whole launch industry had perfectly good, viable rockets sitting around in labs; nobody was launching them.”

He wondered why. “That’s when it struck me that I could build a small rocket to get small satellites in space.”

“Like all brilliant ideas; I discovered that there were others working along similar ones,” he laughs, “At least it was validation that my idea wasn’t super crazy.”

Around that time Ravichandran got in touch with Professor Satya Chakravarty, a rocket scientist and head of National Centre for Combustion Research and Development (NCCRD), at IIT-Madras. Prof, as he is referred to by the Agnikul team, was willing to give Ravichandran’s idea a real shot. So, in 2017 Ravichandran moved back to India and formally co-founded Agnikul Cosmos with Moin and Prof Chakravarty. The company was incubated at IIT-M and the founders met RV Perumal, former ISRO scientist and the man behind the PSLV launches. “RV Sir guided us on who to hire and how to approach things. With Prof’s help we had access to lab facilities at IIT. We were completely bootstrapped; Moin and I pooled in all our savings,” he says. Gradually the two began meeting the investor community, but most meetings turned out to be more educational than transactional; the industry was at a very nascent stage back then.

They got their first break when Vishesh Rajaram from Speciale Invest helped them with seed funding of $500,000. Gradually people began taking them more seriously and they test-fired their first rocket in 2018. By February 29, 2020 they got more investors on board and raised $3.5 million. Three weeks later the country entered a nationwide lockdown. “But we used the time to focus on design, backup strategies, ways to minimize hardware iterations and maximize software iterations,” says Ravichandran.

But Agnikul is not the only player in this burgeoning space. Several companies such as Skyroot Aerospace, Oneweb, Pixxel, Bellatrix Aerospace, and Dhruva Space are vying for the honors, Hyderabad-based Skyroot, founded by former ISRO scientists Pawan Kumar Chandana and Naga Bharath Daka, too revealed their fully 3D-printed cryogenic rocket engine called Dhawan-I late last year.

The government’s decision to throw open space tech to private players in June 2020 came as a shot in the arm for Agnikul. The team went on to consolidate their standing by signing a formal agreement in November 2020 to work with ISRO on building launch vehicles from India.

AGNIKUL is a startup that will build launch vehicles to carry micro/nano satellites to low earth orbit on demand. They recently test-fired a fully 3D printed semi cryo rocket engine at IIT Madras. Terrific champions of the future. I’ve personally invested in the company pic.twitter.com/njW1Gld1wa

Earlier this year Anand Mahindra tweeted about the company and announced that he had invested in them in a personal capacity. In February 2021, the team successfully test-fired Agnilet, a completely 3D printed rocket engine; probably the first to be made entirely using a 3D printer.

Interest in space tech is starting to grow. In fact, the global space industry is expected to generate $1.1 trillion by 2040, according to a report by Morgan Stanley.

“We are essentially a cab ride for these people. We help them take their payload up to space. India is now being taken seriously for its private space tech and the industry is changing as we speak,” says Ravichandran.